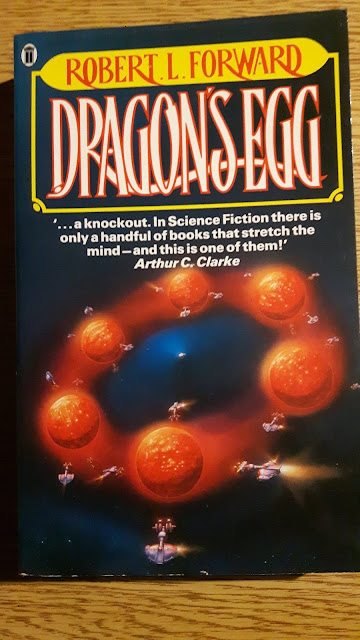 I just got around to reading DRAGON'S EGG.  It is probably one of the best hard science fiction novels I've ever read.  I thought the human characterization was weak in places (not enough introspection, lack of diversity of characters), but clearly Bob knows about the scientific establishment! Actually, I thought that the alien characters were better drawn.

But there is a nit to pick, which I do not believe I have seem mentioned in SFL (*). With a very high Gauss field, not to mention the dense atmosphere, would not there be some strange optical effects? The atmosphere should make for strange refraction patterns, similar to those on Venus, where the horizon curves UP into the sky. And the high Gauss EM field should make optical effects dependent upon the direction you are observing them. If this is correct, then the optics practiced on the DRAGON'S EGG must be far more complicated than were presented in the book.

The only real mention I recall of strange optics were those at the poles, which were attributed to relativity. Are they the EM effects mentioned above?  Or were they effects due to the high gravity (acceleration) at the surface? (I believe the distinction here is between the special and the general relativity effects).

Note to Dr. Forward: the book had to be special ordered... how many are out and why are they so scarce? Also, do you ever think a single book will win the Nobel, Pulitzer, Hugo, Nebula, and Moebius {?} prizes? Somehow, no matter how good a book it is would seem not to appeal to at least one of the judging groups! Also, how fast is long and short talk? Does the reference to acoustic waves mean "sound" speed? The speed of sound seems fantastically slow communication method to beings a million times faster than us.

The ending of DRAGON'S EGG in the original draft sent to Ballantine/Del Rey was a long, rambling discussion on the future of intelligent life. It was full of philosophy on robotics and the nature of intelligence, space, time, and the universe. It encompassed all of space and time and contained zero plot, characterization, and action. Fortunately Lester del Rey got to Bob Forward before the readers had this rambling letdown ending imposed upon them. HOWEVER, those masochists among you who would like to plow through 4000 words of the stuff (cut from 7000 words) can send me their NETMAIL address and sometime next week I will inflict a copy on you...I've got it on my BBS but it's still not publicly available.

I also note that there is a sequel to Hal Clement's "MISSION OF GRAVITY" called "STARLIGHT" which evidently has been out since '71, but which I just noticed. I enjoyed "MISSION", though I found "DRAGON'S EGG" a much more interesting discussion of much the same problems. A major difference between the two is that Clement assumes the Mesklinites run on real-time (e.g. "human" time), and the cheela run on mega-human time (1 million times faster).  It Is interesting that Clement did think of this, as witnessed by his character remarking "We knew things would fall faster here, but we just assumed you (Mesklinites) would therefore have faster reaction times."

[2018 EDIT: This review was written at the time as I was running my own personal BBS server. Much of the language of this and other reviews written in 1980 reflect a very particular kind of language: what I call now in retrospect a “BBS language”.]