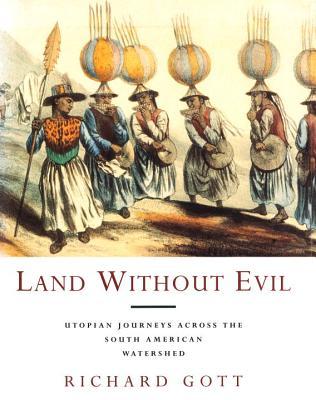 It gives me a lot of pleasure to mention Richard Gott's work "Land Without Evil - Utopian Journey Across the South American Watershed."

Whilst I did not intend to get mixed up with the Watershed on account of its complexity, his endeavor to go up the Amazon all the way to (probably) the Pacific, in the 1970s, was almost as much of an adventure then as it was for the 16th C conquistadores.

My preferred sea lane would certainly have been across the Panama isthmus and down the Pacific coast. Dealing with half a dozen tribes or nations, was surely much easier than with half a dozen 1000s of highly bred/inbred tribes, the latter being the case going up the Amazon as a traffic lane; far too many traffic islands! I have been distracted from my purpose, which is really the remaining tribes, and one indigenous 'nation' of Argentina, but it has been very instructive indeed, about how to write/research a geographical history. Answer? Go for the churches every time! Go for the personalities of those churches, and without allowing you to guess, that they were Jesuits, in vast numbers, as well as Spanish government appointed administrators.

Had the Jesuits prevailed beyond the 18th C, revolutionaries of an entirely different ilk, might well have had little internationalism (i.e., the subcontinent's political unity) to think about. As it is, the small world we live in, provides excellent resources to create international organisation, to represent all south American nations in the big wide world. Those nation states..... Bolivia, Peru, Ecuador and so on, were founded by partnership, with the already warring tribal 'nations', frequently by servitude and slavery.

I do know the history of the foundation of the nation of my own nation, Portugal,  well enough, to be able to ascertain whether the spoils of empire caused the divisions of the Iberian peninsula; or  maybe Brazil became definitively Portuguese on account of the conflicts in Spain and Portugal. Bit of both truth be told! The date of the Jesuit removal from South America was justified and caused by the kings and queens and history of Western Europe. Quite what Pinochet wanted to thank Mrs. Thatcher for, sitting in a Cafe in Picadilly, heaven only knows. Had he gone a few metres up street to the Ritz, he might well have been greeted by Dennis, who made that his regular haunt for many years. Perhaps he forgot the table gratuity required by tradition, at the door, or perhaps Mr. Corbyn was the door porter that day and determined to set up an extradition proceeding against President P.
Publicada por Manuel Antão à(s) 1:58 da manhã Sem comentários: 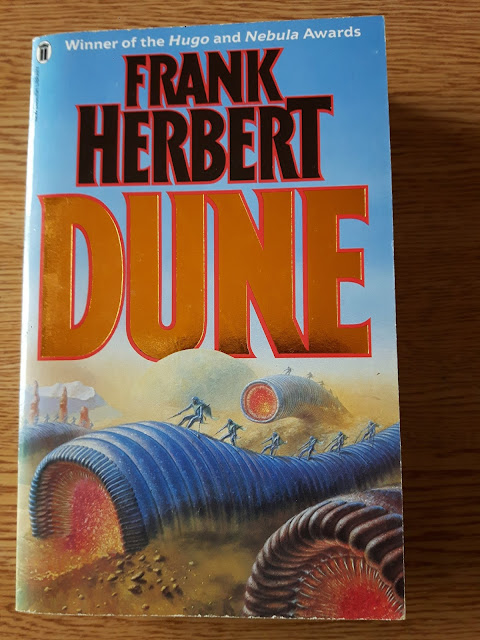 Time has only made it grander in its vision. I mean, there was a time when Islam wasn't the great, dangerous "other" to Western eyes. Moderate Islam had an appeal to the west, for example, Goethe's west-eastern Divan. Dune stands in this tradition. It describes a world which is full of Islamic thought. It is world in which Islam probably pushed aside Christianity to become the world's leading religion. In demographic terms, Herbert will most likely turn out to be correct. Also, Paul Atreides is a soldier as well as a religious leader, that means, he is not a Jesus figure (who was not a soldier); he is a Mohamed, the leader of a state and of a religion. Then there are the themes of climate change, genetic engineering, the artificiality of religion, which were prophetic. Herbert had a keen eye for the themes that would dominate the next decades (centuries?)

And then there's the literary impact, for example, the way the inner thoughts of the characters is written in italic. “The Song of Ice and Fire” copies that. And thinking about it, the story arc of Robb Stark has similarities to that of Paul Atreides: their fathers are being made an offer they can't refuse and are being forced to relocate to a hostile environment (the desert/the south); the fathers die in a political intrigue and the son and his mother lead the army to avenge them; if it wasn't for the Red Wedding, Robb Stark's arc would have (almost) been the story of Paul Atreides. However, the supernatural elements of the Atreides' character are transferred to Bran Stark.

I don’t like all the sequels; had to read book 5 and 6 twice though to really mildly enjoy them, and the philosophical basis of the narratives wears thin at some point. I mean, the sequels mostly tell stories that are being described as logical consequences of their predecessors. Paul Atreides's rise must lead to his downfall. Leto Atreides does what Paul couldn't do, and then things happen the way Leto predicted them. And then the books stop before the ulterior motive (possibly shoehorned into the Dune world at the time of book 4) is revealed. But I guess the Star Wars novels sort of picked up that concept with the Yuuzhan Vong. 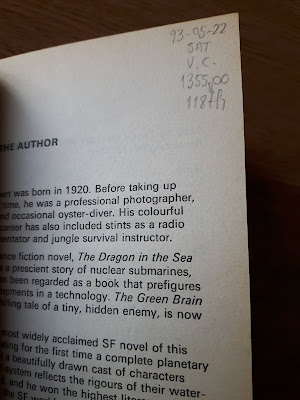 - The more recent mini-series version of Dune & Children of Dune provided a story much closer to Frank Herbert's original;

- David Lynch's version still gives me nightmares - the scenes on Salusa Secundus are quite horrifying; I always knew the Harkonnens were bad from the book, but that bad? whoa. On the other hand there are some aspects I think Lynch really did well - the Giger-esque sets were based on the sketches for Jodorowsky's film. Sting in cod-piece? Classic!

- The music by Toto was still pretty good, and don't forget one of Brian Eno's most famous pieces "Prophecy" is used for Paul's first vision. Also Patrick Stewart as... Patrick Stewart. Actually Gurney Halleck, but since I saw him in this before Sting I picture him more as a lute-playing scottish-sounding psychopath; 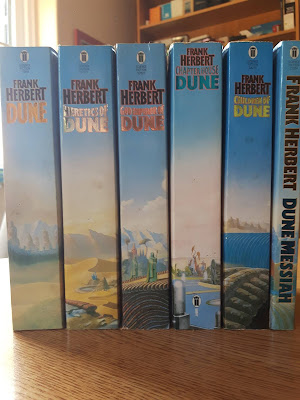 - What amazed me about the original Dune series was how almost all the real action occurred 'off screen' as it were; the narration only showed action scenes that were very small, but highly pivotal events. This evokes to me the real coverage of wars we see in the media - we only see 'news-bytes' and little 30 second vignettes of what a clearly larger, far more complex events. Growing up reading action novels and other media like Star Wars or Star Trek, Dune was a real eye-opener to another way of story-telling, and I felt a superior one;

- I gave up on the mini-series almost immediately, due to the fact they gave away the big twist at the end of the novel very early on, as if it were no big deal. Paul's eventual control of the Spice on Arrakis gives him complete control over the so called Spacing Guild (who have a monopoly on space travel) and therefore over interstellar travel, due to the fact that the Spacing Guild need the Spice to make interstellar calculations. This is the big reveal at the end of the novel. It's this complete control of the Spice that gives Paul complete power over the empire. The Spacing Guild had been keeping their total reliance on the Spice a secret. The first prequel novel also made it seem as if everyone knew the Spacing Guild were completely reliant on Spice for their abilities. I gave up on it almost immediately. Yes, I'm a Dune nerd;

- As for George Lucas, I had read Dune by the time I saw 'The Empire Strikes Back' so I was well aware of how much George Lucas outright plagiarized it. 'Dune Sea' - verbatim. Sandpeople = Fremen, Mos Eisley = Arrakeen, Jabba's Palace = Ducal Palace / Paul's Palace, Moisture farmers, sandcrawlers, the skeleton of what is clearly a sandworm, the Sarlac; rather pathetic.  I seem to recall Mr Herbert was disgusted by the wholesale rip-off of many of his themes;

- Tried to read all of the prequels as well, seduced by their bullshit claim of having found a trove of Frank's notes, but once I got to Dune 7 and read the hack, trite garbage they had coming out of my beloved characters' mouths I realize I had been royally buggered. Literately speaking;

- Another ingredient was Charles L. Harness for the semi-permeable shields causing a return to swordplay and a lot of the drugged-up superbrain stuff. 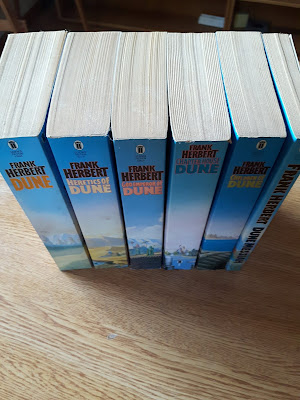 - The basic point about 'Dune' was that it came just after Mariner IV robbed writers of the default exotic locale of Barsoom. Arrakis is one of the first times an author had to invent a planet from scratch to do this sort of thing, rather than as an end in itself as Hal Clement had been doing;

- My memory of the sequels is that the "odd" books were good and the "even" books were terrible, though I confess that the only one I ever return to is the first, and the way Herbert built major changes into his future-history is something I probably overlooked at the time;

In all of the above-mentioned points it's an odd kind of SF; Dune’s world is entirely self-contained. Herbert also had the knack (beautifully developed further by the late great Iain M. Banks) of dropping just enough hints about the historical origins of his world and other "off-stage" establishing details - enough to make you believe that he conceived a totality, without having to explicitly spell it out.
Publicada por Manuel Antão à(s) 2:30 da manhã Sem comentários: