Shakespeare vs Thermodynamics: "The Two Cultures" by C. P. Snow 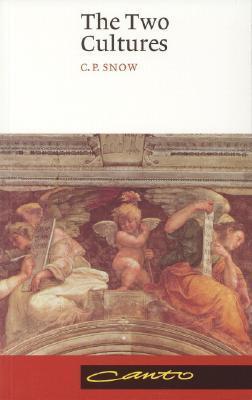 As a maths and physics graduate, I observe that most compilers of the best books of all-time lists are, self-evidently, not from my side of the cultural divide. They should at the very least, it seems to me, be required to read C. P. Snow's "The Two Cultures" and "The Scientific Revolution", not to mention Arthur Koestler's "The Sleepwalkers" (a masterly history of how mankind has viewed, and developed ideas about, the universe) - and then put them on the lists, as they deserve to be there IMO. At least they do if you buy into the idea of a top 100 in the first place, which, in my view, would be like trying to rank great composers/mathematicians/physicists - inherently rather ridiculous. It might have been better though to have just two lists from either side of the cultural divide. It would not be difficult to come up with 100 tomes from the sciences after all. Of course, in the natural sciences, there is the problem of mathematics and the fact that not many 'ordinary' (*) people can cope with it in book form to grapple with. It seems to me that this is a real difficulty which I don't pretend to know how to solve. It is quite right to include Darwin on the list, as that is one of the natural sciences' two 'holy' books - indeed, it absolutely should be there IMO. But, since the other one is Newton's "Principia Mathematica", which is even more important, since in it, Newton takes us from the medieval world into the modern one. Unfortunately, he does it in Latin and by mathematical methods which were almost out of date in his own time. There is a modern 'translation' available in terms of calculus and differential equations, but this would probably leave most people none the wiser.

There is clearly a bias toward English in those lists though - if you're going to have philosophers like Mill, Locke and Hume, what about Aristotle, Plato, Socrates, Descartes and Kant? "The Critique of Pure Reason" should be on there surely. And I say that as someone who is not a fan of Kant for various reasons. Nevertheless, there were greater philosophers than those three surely?

So, from the natural sciences side of the fence, our greatest thinkers are these (IMO):


(*) This is not meant as an insult by the way. A quote from Darwin himself may help actually:
'I have deeply regretted that I did not proceed far enough at least to understand something of the great leading principles of mathematics; for those thus endowed seem to have an extra sense.'

Well, Snow was a successful novelist as well as being an eminent scientist, so he was better placed than most to be critical it seems to me. Actually, he had an addendum to Darwin's quote:
'I now believe that if I had asked an even simpler question- such as "what do you mean by mass or acceleration?", which is the scientific equivalent of saying "can you read?" - not more than one in ten of the highly educated would have felt I was speaking the same language. So the great edifice of modern physics goes up, and the majority of the cleverest people in the western world have about as much insight into it as their neolithic ancestors would have had.'

Do my esteemed readers also consider that to be overly harsh? Because I don't. If I, with a degree in Computer Science Engineering can be expected to read Shakespeare (I have done that), then I don't think it's unreasonable for me to expect the 'other side' to know what Newton's Laws of Motion are. Or the Laws of Thermodynamics for that matter. After all, they tell us profound things about the way the world works, and, in the particular case of the Second Law, they delineate the limits of the possible from a technical perspective. I do NOT mean knowing them in excruciating detail in the way a physicist would, incidentally, but nevertheless, an outline appreciation seems a perfectly reasonable expectation to me. Or do you not think that a humanities graduate is intelligent enough to do this?

But Snow was an eminent scientist, and so it was natural for him to seek examples from his side of the divide, as it were.  Indeed, there is a very pressing reason why people schooled in the humanities could do with a modest dose of physics - global warming/ climate change (****). The level of (often proudly displayed) ignorance about this, surely THE most important issue of our time is quite horrifying and deeply depressing to someone like myself. Quite often it is displayed on our Sunday Newspapers, which is why I will keep saying until I am blue in the face that, unless you know the basic (**) physics of how the climate system works, then anything you say is 'full of sound and fury, signifying nothing.' So, if I, a natural sciences person to my fingertips, know my Shakespeare, I think that I can reasonably expect the arts mob to make a bit of an effort too - or at least to admit their ignorance, shut up and listen to people who know how stuff works. And then, guided by those people, make policy decisions that might just save us all.

(**) You may say it isn't basic, but actually, some of it is. I am not suggesting that humanities graduates be expected to understand and solve the equations of radioactive transfer and the Navier-Stokes equations of fluid dynamics. They are quite difficult enough for highly-trained physicists. But, it is reasonable to expect people to have some notion of what a greenhouse gas is, and why some gases in the atmosphere are while others are not greenhouse gases. It is reasonable to expect people to have some notion of the different timescales in which warming effects will take place (some will take a few decades whereas others will take centuries). It is reasonable to expect people to understand the difference between sea level rise due to thermal expansion of water (about 15cm per degree Celsius), and that caused by melting icecaps (about 200 metres if the Greenland, West Antarctic and East Antarctic ice sheets all melt - this would take 500-1000 years) and the attendant devastation(***) caused around the world as a result. With all this and more in mind, I am quite happy for the policymakers to enjoy Shakespeare et al, as long as it doesn't get in the way of understanding actually important things!

(***) I must admit, I'm very glad that I will be long gone by the time things (probably) get really bad.

(****) (*someone waving frantically in the back of the room*) "There are people who know physics and mathematics and don't think that global warming is right. I had a neighbour who was a teacher for both subjects and didn't believe in GW and I know a physics (from an Anglo-Saxon country) who has a PhD in Physics and some years ago talked about it sceptically. So, knowing physics isn't a guarantee that you understand very much about global warming. On the other hand many people who don't understand many scientific details about the theme had absolutely no doubt about GW."

My answer to the PhD guy in Physics (****): "I have seen quite a few variants on the 'knowing physics isn't a guarantee that you understand very much about global warming' argument/defense on the Sunday Newspapers in the last few years, and my succinct reply is, as always: 'learn a bit then, it's not that difficult.' That person that says having a PhD in Physics should maybe learn some stuff on planetary atmospheres, putting him ahead of someone who specialised in, for example, solid state physics; your PhD friend should certainly have the necessary skill set to get to grips with the basics in pretty short order should they wish to do so."