Extraordinary Coincidences: "The World of Yesterday" by Stefan Zweig 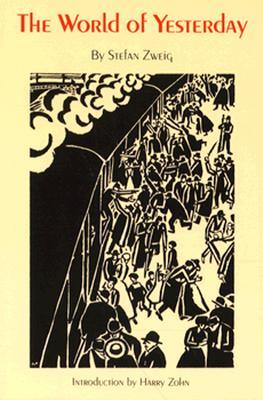 "The World of Yesterday" has its flaws - some of the scenes that Zweig claims to have witnessed, particularly around the outbreak and conclusion of the Great War seem such extraordinary coincidences as to be barely credible. And on the subject of style, it's hard for a non-native German speaker to judge, so the opinion of Michael Hofmann - who's such a magnificent and sympathetic translator of Zweig's far greater contemporary Joseph Roth - has to carry some weight.

But I can't help suspecting that Zweig's paying the price for his popularity here: the fact that his novellas were made into "women's pictures", that he was so fascinated with the past, and with the nuances of social hierarchy; that he dared suggest that the pre-1918 European order might, on reflection, have been a rather better world than what succeeded it. (It's not just Zweig; Roth's modern champions, including Hofmann, invariably play down, or appear properly embarrassed by his passionate late-flowering monarchism). Absolute anathema to "progressive" intellectuals then and now (though you can see why an Austrian Jew might have preferred the world of 1913 to that of 1938. And why an eloquent, readable advocate of those values could have had a massive inter-war following).

Which is not to deny a certain "pulp" quality in some of his writing. But still, while he may not have been a great stylist, he does have an ear for the telling phrase, and - in "Beware of Pity", for example - he evokes the values, social structures, tastes and feelings of an entire vanished civilisation to wonderfully vivid effect. In my view, it's second only to "The Radetzky March" as an evocation of the moment of the Austro-Hungarian apocalypse; and as a history teacher, I recommended it to students for evoking a "feel" of the period in a way that I simply couldn't with the less readable, but more intellectually respectable, Broch or Musil.

And let's face it, Zweig is hardly outselling Dan Brown in the English-speaking world. Better, surely, that he's read than not - and it'd be a shame if this academic spat deterred a single genuinely curious reader.