Lucy: "On The Shoulders Of Giants - The Great Works Of Physics And Astronomy" by Stephen Hawking 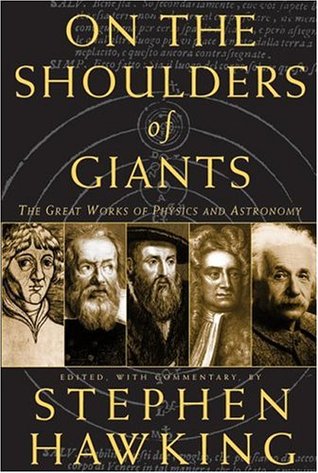 Back in the day, Einstein opened up my head to what I thought of as the architecture of the way things are, that level of intelligence/information where I clearly understood what reality was and wasn’t despite the limitations of my senses. I'd try to hold onto it but it ultimately faded. I'd feel myself coming closer and closer back to dull reality, each and every time. There's a scene in the film “Lucy” where she's looking at a tree which seems alive, pulsing w/movement and brilliantly coloured light. Ages ago, my friends and I called them jizzles and we'd see them anywhere anything grew (resulting in multiple trips in the woods, old cemeteries, anywhere there was foliage and we couldn't see buildings). We live at a gross, aggregated level of existence. The levels of explanation of quantum physics does not change life as we experience it. Pure science would struggle to explain fully everyday events because of their complexities, unlike in laboratory conditions, but somehow we deal with them in actual life.

If you are interested in physics try learning more basic things first (that are also more solidly founded), try learning basic quantum mechanics and special and general relativity. That will already keep you busy for a long time and they are necessary to understand more advanced work anyway. These "I'll teach you most advanced things / I'll teach you what time is without bothering you with any of the basics" most of the time just mislead more than inform - especially if they are this far out and use baity books like this one.

Physics isn't about just making any speculative fancy-sounding claims; it's about testing claims and reproducing observations and thereby gaining confidence in the claims. It isn't automatically "progressive" to make speculative claims that have little physical foundation. Again if you are really interested in physics there's 100 years (more than enough) of modern physics to catch up with, which even students take years to learn. This is solid work that has reached a status that is as close to fact as possible in science.

The more I read this book (and bookmark to go back to later), the more I know I have to learn before beginning to understand. I think it's worth reading it, actually. Also, I spend a lot of time staring off and thinking about what I've just read. The same cannot be said of Hawking’s introductions. What was their purpose? Sell the book? Alas, the publishing industry at play here again. Even Derrida didn't go as far as claiming that the text transcended the whole of material constraints.

5 stars for the original texts; 1 star for the introductions. 3 stars altogether.