The Malloreon, Vol. 2: Sorceress of Darshiva / The Seeress of Kell 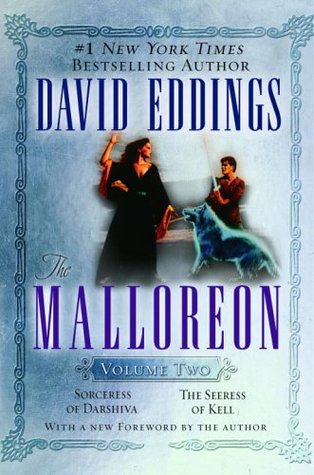 In "Sourceress of Darshiva" by David Eddings

"Urgit, High King of Othol Murgos, was wearing a blue doublet and hose, and he sat up on his garish throne in the Drojim Palace."

In "Seeress of Kell" by David Eddings

Uhm...something is afoot here...Is it possible Eddings is copying himself...?

The situation is that the demarcation lines between 'literature' and 'popcorn reads' and all points in-between run through the middle of genre fiction as they do through the mainstream, not outside of it. Within the fantasy field you have stuff like Eddings, Gemmell and Brooks at the lowest-common denominator, multi-volume, sub-Tolkien, somewhat mindless end of the spectrum and then you have people like Peake, Wolfe, Chabon, some elements of Moorcock and the magic realists hanging out at the literate, 'important themes' end of the spectrum (but not you, Mr. Goodkind, no matter what you say, you're way down in the hole) and the likes of Mieville, Martin, Erikson and Bakker running in-between. Gemmell and Eddings both wrote terrible, paint by numbers fantasy - although Eddings was somewhat worse. Neither of them had any capacity for creating characters or landscapes, and they deserve to be remembered as feeding adolescent pimply geeks with their cheap thrills. Tolkien created a whole culture, a new vocabulary, a whole new way of writing, and for this reason remains the master. You really can't compare hacks with genius. Despite being in Hell Pit of SF, David Eddings's names are "excellent" - he "understands" the value of linguistic patterns, so there prefixes such as Bel- and Pol- indicating service to a particular god, and phonemes such as Gar to indicate family relations (Belgarath, Garion, Polgara). Each country in his Belgariad and Mallorean series has its own linguistic quirks, but they're not too heavy-handed: he can make a character fit in or stand out from a community at a stroke. Added to that, he's got some of the best nicknames: Silk and Velvet are, of course, "sneaky and brilliant spies", whilst Old Wolf is the "garrulous but wise alter-ego of a great wizard."

People who don't know any better confuse SF with the dreary swords n' magic dross churned out by the like of Eddings: "Urgit, High King of Othol Murgos, sat on his garish throne in the Drojim Palace of Rak Urga" Book 5 (5 fercrisesake) of the Malloreon. This witless guff sells by the million to people who find "LOTR" a bit of an intellectual stretch.

Too bad Eddings couldn't write even if his life depended on it. He just gives SF a bad name.