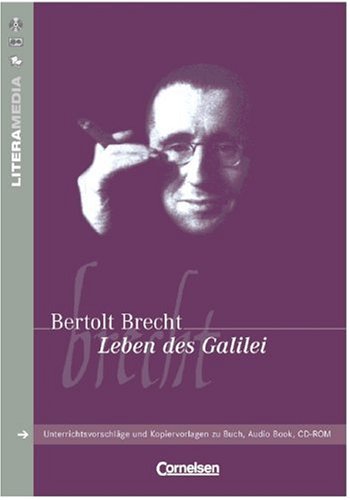 I was absolutely mesmerized! I was so mesmirized that I had to buy the play in German which I did two years later (it was out of stock on Amazon at the time). The version of "The Life of Galileo" that the Teatro Aberto presented in 2006, with the reduced title by which it is better known, is based on the second of the three versions.

The general belief in a geocentric solar system was based on Aristotlean writings and Ptolemeic astronomy and was the generally accepted science when the Church was first formed. The Pythagoreans had proposed the idea of a heliocentric solar system around 600 B.C., but it was not accepted science at that time, nor six centuries later. The geocentric idea influenced early Christian theology, as did the writings of the ancient Greek philosophers. Unfortunately, what the Church did was change the Greek idea of seeking truth and knowledge through intellectual thought and science into seeking truth and knowledge within the scripture only. And thus, the Dark Ages began. Anyway, the heliocentric theory was revisited by astronomers and mathematicians throughout the next two millenia, until it was finally accepted, and through no simple means. Overcoming an authoritative figure that has huge political influence and control over many of the universities is no small task, not to mention the mathematical, scientific, and equipment challenges. the trouble with the heliocentric model at the time of galileo's discoveries was that there was no coherent theory of gravity until newton's publication of principia in 1783. given that matter tends to "fall" toward the centre of the earth, it's quite intuitive to theorise that the earth is the centre of the universe. Although galileo's evidence for a heliocentric model (ie. phases of venus, topography of the moon and satellites of Jupiter) was quite compelling , in the absence of a theory of gravity it wasn't complete enough to debunk the geocentric model. In other words, the objections to heliocentrism weren't necessarily ignorant and arrogant ; there was also a scholarly debate that, had merit on either side.

Two points should be made here:

1) Galileo's telescopic obvservations had nothing whatsoever to do with his conviction on heresy charges. They had to do with his publication of a book called "Dialog on the Two Chief World Systems," in which he was judged to have violated the pope's order to give a fair account of both the heliocentric (Sun-centered) and geocentric (Earth-centered) systems, a concept he personally submitted to the pope before going ahead with the project.

Note that Galileo was not prohibited from discussing the virtues of the heliocentric system. The concern was that the system was unproven, and that certain passages of scripture, in their literal sense, suggested the geocentric theory. Cardinal Bellarmine, who was one of the principal officials in the affair, acknowledged in writing that the Church's rejection of heliocentricity was provisional, and based on the scientific data available at the time, and might have to be changed in the future if further evidence emerged . And in fact, we now know that many aspects of the Galilean-Copernican theory were false, and very much so. In some ways, the Ptolemaic system was more correct, including variable orbital velocities, something eliminated from the Copernican system.

2) Copernicus was never persecuted for his book promoting the heliocentric theory, and his book was not censored by the Catholic Church, circulating freely throughout Europe for many decades before Galileo's run-in with the pope. Copernicus, by the way, dedicated his book to the pope, and he himself was a cleric with minor orders. After Galileo's conviction, only one sentence was stricken from the work.

Personally, I'm thankful for the Church's scientific brilliance and its contribution to humanitarian thought and advancement. I'm also thankful for some of the philosophical and spiritual wisdom that comes from religion. But the Catholic Church wasn't alone in suppressing scientific thought, and not all evil and closed-mindedness comes from religion. Many an authoritarian atheist has succeeded in suppressing and killing millions and squashing ideas that challenge their authority. And then there are always the economic interests that suppress or support scientific findings.

The Catholic church at the time was in the tricky position of wielding both secular and spiritual authority. Although interpretation were made they also tended to believe that the very best sources of information (whether biblical, philosophical or practical) were ancient. Unfortunately a lot of it was also inaccurate but people still tended to believe it *and* allowed it to shape their perceptions. What complicated things was the prominent faith component of Christianity that made doubting such ancient wisdom sinful and dangerous. I recommend people read a Beastiary to see what kind of mind-set they were working from at the time. Galileo was one of those people that allowed others to look at the universe with fresh eyes and thus encourage modern, scientific thought. It is also interesting to note that Galileo wrote Sidereus Nuncius in New Latin rather than Medieval Latin. This meant that a wider audience was reached, rather than just the clergy or the rich well educated upper classes. Everyday people could read his work, which made Galileo one of the first science communicators of the age, and this loss of control of the masses frightened the Catholic church nearly as much as the knowledge contained within his work.

Copernicus's work was actually used in the development of the Gregorian calendar. the Catholic Church had not been vehemently opposed to science for centuries. In the 13th century, there had been many disputes about the relationship between those that wished to follow the natural philosophy of Aristotle and those who rigidly stuck to scripture to explain everything under the sun and the idea that scientific speculation and its logically based predictions were futile as God could anything he wanted at any time. However, William of Ockham produced a brilliant solution to the problem, he declared that God was indeed omnipotent and could do anything he wanted but he had also given man the logical mind to predict these outcomes even though they were inevitably fallible. It lead to a divorce of faith and reason - Science was in man's attempt to guess the will of God but it was not an attempt to declare that will so don't persecute them as they're only guessing. Early Scientists worked under this restriction for centuries, by modern standards it seems ridiculous but it gave early scientists plenty of leeway. All they had to do to avoid persecution was explain that their work was only speculation and dedicate it to the Pope. Galileo choose not to do this, instead he mocked the arrangement and this was how he fell foul of the church. It was an error as it did not advance the cause of science, he wasn't in a position to mock his critics as he did not have a convincing proof of his heliocentric system, he didn't even accept Kepler's groundbreaking work. It takes time for new scientific ideas to break through and heliocentricism wasn't widely accepted until after Newton.

Bottom-line: What really infuriated the Pope was that he used the telescope to inspect the ceiling of the Sistine Chapel a little more closely, and saw that Michael Angelo had depicted God running away with his trousers down. It's in the second from last "panel" as you look from the entrance of the chapel. Needless to say, he flew into a rage and blamed Galileo for inventing such a blasphemous object. "It is not for mankind to dwell upon images of God's buttocks" he is reported to have said. However, he unable to do anything about it as Rome was in the middle of a ladder shortage, so the ceiling had to remain as it was. So Galileo was made a scapegoat. 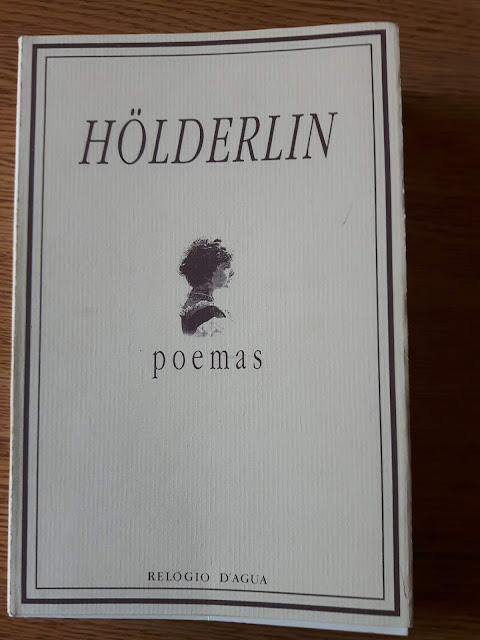 If Hölderlin did it why can’t I do it too? Here it goes:

Yes, we need some good poets
And I think we all know it’s
Something we’re lacking….
My mind I am fracking
But still failing to see
how wishing makes it be.
They fuckitup,
We suckitup.

When I was young, appendectomy was done under local anaesthesia. I was so afraid, I might end up in a situation like that, that I memorised some of Hölderlin's poems in a Portuguese translation by Paulo Quintela, as ways of coping with my fear. I never had an appendectomy, but I still recite in my mind some of those long ago learned Hölderlin's poems when I have to sit in a dentist's chair...
When I was young I had this feeling of uselessness of having a book once I read it, so often I passed them on to my friends (for good). Nowadays I give away "bad" books, if I happen to read one (last one was "Fire and Fury" by Michael Wolff - looked so fascinating with Trump on the cover looking like a weasel that I just had to buy it. I tried reading it, I really did, but couldn't finish it. I'm ripe for a piss take from all of my fellow blog readers then for having tried this stupid action... It turns out the book is just a sitting on a fence money grabber.) 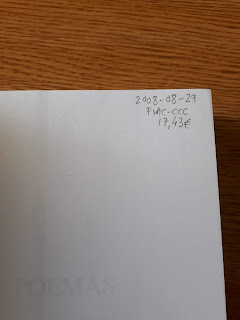 I’ve got about physical 5000 books now (about 2/3 already read once or twice, or more), waiting for my retirement years. Maybe 60-80? If I don't make it, waiting then for my grandchildren, yet to be born...And a about 500 movies to re-watch: Pedro Almodovar, John Ford, Howard Hawks, Woody Allen, Chaplin, The 37 Shakespeare BBC movies, and more.  If I go Alzheimerish, my kids are already instructed to keep my collection (books and movies) around me, whatever happens. 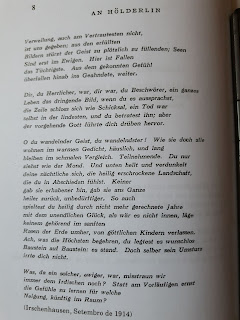 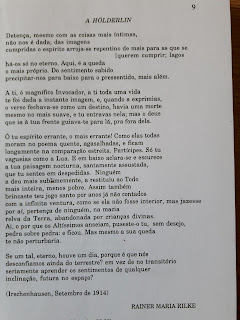 Some famous writer (Mark Twain? or was it E.M. Forster in “Aspects of the Novel”?) once said that if your memory is bad enough you never need to buy a second book. If kids are re-reading books, re-reading may be a good thing in various ways, apart from just saving money and shelf-space. One is that they may be learning that what happens in the plot is not everything: on a second reading you know that, and can pay more attention to the characters and how they speak and act, to how the plot is built up, and how the characters and plot are presented. 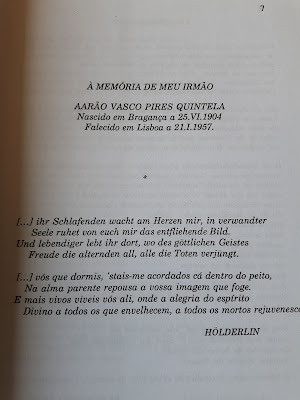 (Paulo Quintela's dedication to his brother)

The problem with most of contemporary poetry like my own attempt above is that they are increasingly minimalist. Two weeks ago I went to a car showroom to have a look at the new Hybrid Toyota, and needed to use the gents while waiting. There was hardly anything there but dim, hidden lighting and no sign of taps or plugs etc. There were squarish chunks of white ceramic stuck to the walls with nothing to indicate whether you wash your hands on them or pee on them? What the Ladies would have been like I dread to think. What's wrong with basins with chrome taps and plugs, plus loos with levers for flushing?

Nabokov said that reading only happens the second time; the first is merely finding out what happens. Back to re-reading Hölderlin.
Publicada por Manuel Antão à(s) 1:07 da manhã 2 comentários: