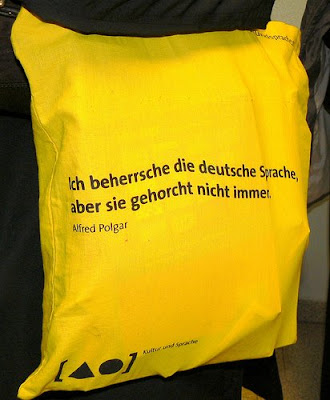 I finally decided to tackle Thomas Mann’s work. My first contact with him took place when I was preparing myself for the ZMP Certification in German. We were able to read in class some excerpts from his main books : “Buddenbrooks”, “Der Zauberberg”, “Tonio Kröger”, and so on. What I remember most from those texts was the extreme difficulty of understanding some passages. Some of his vocabulary belongs to another level, that it’s no longer used today (let alone by German writers of today). Another trait of his writing is his ability to write long and encapsulated sentences without losing meaning. That’s the feature that I remember the most.

The German language has a very distinctive feature that sets it apart from the rest of the languages that I know, that is, its ability to place the German verb at the end of a subordinate clause. If the subordinate clause is very long, there’s the danger that at the end of it one no longer remembers the beginning! On top of that imagine the difficulty when one uses encapsulated subordinate sentences, also known as "Bandwurmsätze"… It’s a case of meaning within meaning, just like a Pandora box. Sometimes one has to read the same sentence over and over just to make sure that the underlying meaning was perceived! It goes without saying that reading one of Mann’s work can be very tiring and trying. It’s like climbing a steep slope, with the promised land just on the other side. In German classes it was usual to have very hot debates about why he had to use this kind of structure (called hypotactic or embedded subordinate constructions) to convey meaning. I have to say that despite the difficulty, the rewards of being able to grasp the meaning of his texts was a bonus in itself. We had the feeling of having accomplished something worth attaining at the end of each passage.

One of the chief characteristics of the German language is his fairly free word order. The sentence is arranged about the verb, which is the second element in a normal assertion (except in some types of subordinate clauses, where it’s placed at the end, thus giving it a place where it can stand out and acquire special meaning). In the first place comes what the speaker regards as specially important. The following sentence may, for example, be expressed in four different ways:

1. Er hat das vielleicht gesagt, aber er hat es gewiss nicht gemeint
He said that perhaps, but he certainly did not mean it;

2. Das hat er vielleicht gesagt, aber er hat es gewiss nicht gemeint
That he said perhaps, but he certainly did not mean it;

3. Vielleicht hat er das gesagt, aber gewiss hat er es nicht gemeint
Perhaps he said that, but certainly he did not mean it;

4. Gesagt hat er das vielleicht, aber gemeint hat er es nicht gemeint
Said that he has perhaps, but mean it he certainly did not.

Every sentence which has an object may be introduced by this object, without having to use the passive, as one must do in English. The emphasis is therefore in the beginning of the sentence, the information follows in the sequel, at the centre stands the core of the sentence, the verb. German can also be seen as a dynamic language, in which activity, becoming, development are emphasized more than the static state. German is also characterized by a very strong sense of concreteness, compactness and expressiveness. One can express both the activity and the success of an activity with the same verb: “das kann man nicht wegdenken” (one cannot think that away), “Er hat sein Geld vertrunken” (he has drunk away his money).

Recently I dug up one of the books by him that I had bought (but not read) at the time when I was still attending school and I promised myself that I’d try and make-or-tails of it. The book in question was : “Tod in Venedig” (“Death in Venice”). I’ve just finished it and I’m totally flabbergasted by it. My curiosity kept me pushing forward, word by word, sentence by sentence, page by page. I think that now I was able to appreciate him more that I did when I was in school. When reading his texts some “adjectives” come to mind, some of them I’ve already stated: descriptive intensity, wordiness, compactness, longwindedness, hard-to-grasp, and so on.

Mann’s work has some very beautiful examples that we can use to illustrate what I stated above, ie, compactness, vividness, and so on:

“He sat there, the master, the artist who had attained dignity, the author of “A Miserable Man”, who in such exemplarily pure form had renounced bohemianism and the murky depths, had refused his sympathy for the abyss and had vilified vileness; the man who had outgrown all irony, who had grown accustomed to the obligations imposed by the confidence of the masses; he whose fame was official, whose name had been ennobled and whose style boys were impelled to take as a model – he sat there, his eyes closed; only occasionally did a mocking and embarrassed sidewise glance escape from beneath their lids and quickly hide itself again; and his slack lips, cosmetically heightened, shaped isolated words out of the thoughts, the strange dream-logic, of his half-slumbering brain."

As a literal translation this works perfectly, but not in a literary way! A proper writer would translate it differently, using a more prose-poetic-oriented form. Mann could write prose with a poetic tone, which makes it a lot harder to translate into another language.”

Some more examples out of the book illustrating language compactness via substantiveness (“Nominalisierung”):

“Dennoch fehlte es nicht an Augenblicken des Innehaltens und der halben Besinnung.” (“And yet there were still some moments when he paused and came halfway to his senses.”)

“Wer begreift die tiefe Instinktverschmelzung von Zucht und Zügellosigkeit, worin es beruht?”
(“Who understands the deep-lying instinctive blend of discipline and lack of restraint on which it is founded?”)

The use of embedded subordinate clauses can be used as the following devices:

1. More density in the information conveyed, thus allowing a higher degree of precision;

Another example of a very loooooooong sentence taken from the book and indented for a clear reading(page 8):

when his life was approaching its close and

he could no longer dismiss as a mere fancy his fear,

shared by every artist,

had given all of himself,

himself in the mountains and where he spent the rainy summers."

There’s a fundamental, psychological difference between the Anglo-Saxon and Germanic vision of the world, that is, they look at things differently. The Anglo-Saxons put the emphasis on the clarity of the texts, the Germans on the other hand have a tendency to be more rigorous. What the English perceive as “plain writing”, the Germans perceive as “sloppy writing”.

Another example of an embedded sentence devised “à la Mann” by me:

This sentence could be phrased using a more plain and clear structure. Two examples:

Mann’s work must be enjoyed as a very rare, delicate and extremely enjoyable delicatesse…We cannot get enough of it! It’s important to celebrate him, not just to read him. The journey of discovery in itself is pure joy.

I think I’m ready to tackle the “Buddenbrooks”, but first I must take a break. Mann is not only a pleasure but also hard work because his work doesn't come as easy as the rest of the pack…
Publicada por Manuel Antão à(s) 3:39 da tarde 5 comentários: