Only For Slackers: "1001 Books You Must Read Before You Die" by Peter Boxall 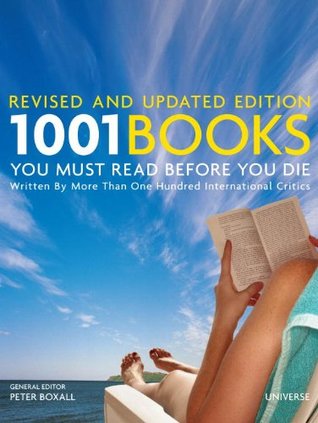 I found this list rather heavy on very recent fiction. There is also no way of knowing whether books published a few years ago will withstand the test of time, and I suspect many won´t. This is a reason why, apart from a handful of favourites, I tend to restrict my (sadly limited) reading to more established authors. 4 times out of 5, when I believe the "hype", I end up disappointed.

I also found this list astonishingly weak on works not written in English. I certainly didn´t keep count, but it seemed as if about 2/3 of the books on this list were - this is a pretty arrogant and unbelievable figure - especially as many English-language writers appeared multiple times. As someone fortunate enough to have grown up bilingual, I know that some of the best books don´t translate well, but the real problem is that fiction in translation simply occupies not only a very limited market but also a low-status in the English-speaking world. In this respect, Boxall, a Brit, has definitely much to learn from us Continental Europeans.

Along this line, the book I’m glad Boxall didn’t miss the most was Fernando Pessoa´s “The Book of Disquiet.” This Portuguese writer may be largely unknown among Anglophones, but the Spanish, French, Italians and Germans have long since caught on. And not just them. Harold Bloom, who many would argue “knows a great deal” (he has read a lot) about literature, included Pessoa in his "canon" of the 10 (only 10!) writers everyone should have read! But I suppose the fact that this book has neither a definable plot nor belongs in any known genre would mean it's be too much for Boxall to handle. Still, please read it! (And when you do, choose the Richard Zenith Penguin translation, which in my opinion, is far superior to the Margaret Jull Costa one, which even translates the title as the far more awkward “The Book of Disquietude.”) This collection of notes, written around the 19-teens and twenties and published posthumously in no particular order, is by far the most philosophical and prematurely postmodern reflection on the self any of us are likely to come across. (Who else could imbue a sensation we all know with so much poetry - even in translation - and metaphysical weight as Pessoa, when he writes, for example, "... this was denied me, like the spare change we might deny a beggar not because we´re mean-hearted but because we don´t feel like unbuttoning our coat.") Anyone I know who has read it begins to integrate the adjective "Pessoa-esque" into their reflections on life, and I always say, if I had to choose one book to last me the rest of my life, this and certainly not the Bible, would be it. Shame on you Guardian books staff, for ignoring one of the undisputable (but tragically, non-English-language) masterpieces of the 20th century!

Having said this, and to be honest, this whole idea of a "thousand novels to read before you die" is so bloody middlebrow and offensive; it just cannot be taken seriously, especially when the list that resulted from it is so tedious and slapdash. To read through a 1,001 novels just because some bugger says they're important, but with no real and based explanations given as to why they are, nor any idea as to why this particular list of novels should be read, is silly.

I'm sure there are worthy authors missing on this list, but it won't be improved by their inclusion. The whole idea is just patronising.

1,001 books to read... at my age, I don't know if I'd get through them all unless I live till my early 100s (by which time there'll be others on the list). And reading only a handful of novels a year? Please!! That's slacking. I’m reading around 100 a year and I want to read stuff not in this book… 2 stars for the inclusion of Pessoa…wait, wait…No Shakespeare, no Dante, no Marlowe, no Virgil, no Homer, No Plato, no Socrates, …, forget it, 1 star! Boxall is crazy!