Motorcycle Emptiness: "The Book of Disquiet" by Fernando Pessoa 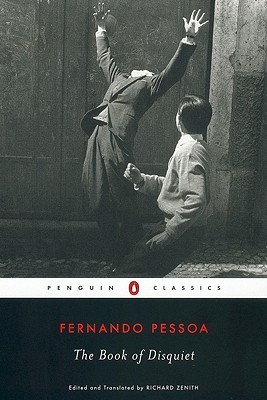 You'll admit I'm sure that many do indeed adopt nihilism/inner 'emptiness'/void gazing/ennui -- Motorcycle Emptiness for short -- as a social pose, as a way of attracting chums, sexual and otherwise. And this will of course continue no matter how many read Wallace or Lee Rourke or this here little chat.

So what I'm really driving at is this: what's the point -- literally; I'd really like to know -- of fiction (or art of any kind) that gazes into the void *and then keeps gazing*? Of what use is void-gazing writing to some impressionable victims? Let's not forget that Nietzsche is *not* recommending an overlong gaze into the abyss ('lest it also gaze into you'). And let's never forget that although Hamlet may peak with 'To be or not to be...' it does not *end* there.

Pessoa had a grand old time. Got through a bottle of wine most evenings, had a cushy civil service job where he was allowed to spend most of the time working on his private projects. He was friends with Aleister Crowley and I can only speculate about what they must have got up to. Honestly, we're talking about one of the world's great artists here! Too few know him outside of the Lusophone world. Surely after 100 years or so we can ready him safely enough.

It is not the glamour of ennui/emptiness that interests me; so the tears I find beautiful are those tears that Pessoa wrote onto the page - and those that were left behind in his trunk - and those he chose to ignore. I am interested in the beauty he saw in his mundane life. I am interested Pessoa's own intellectual sadness, yes. Not the actuality of it. How could anyone find despair beautiful?

Now, the 'meaninglessness' in Literature that interests me is something special: those voids, facades, created by the author. The fact that everything is lost; Blanchot hammering home the truism that once a writer has put pen to paper s/he has failed. Pessoa seemed, to me at least, fully aware that the very act of writing (not what is written) is meaningless, an illusion - hence his multitudinous personalities. For me the beauty I find in writing isn't necessarily what I read on the page, it's everything that is left, consciously or unconsciously, behind. For me the truth is never written. Nor can it ever be. Isn't that the epitome of all that is beautiful in Literature, yes?

I really don't think Pessoa is deconstructing Literature, although I feel he's revealing its translucency via playing with it's assumed rules, but it's a thorny one; on one level I'd argue that a writer is responsible only to themselves; however, I'd also argue that that self is the whole person, an adult with a full range of responsibility in the world. As such, the artist (writer) is responsible for looking squarely at the world and at their own responses to that world and for then making art that is true to what they see and that interrogates their responses. Not art that is hip, or art that will please an imagined readership, but art that is, on some fundamental level, true. The big problem is when a specific "stance" towards the world comes to be seen as the sole valid "artistic" position; when the would-be writer insists on being true to their idea of what art "should" be rather than accepting the responsibility. Worse still, they may decide that the stance they have adopted (which is, in effect, how they have chosen to respond to the world) is beyond question *because* it is "artistic".

So, the artist (writer) is responsible to her/him self only, but the whole self, the person who has friends and family who the would like to be happy, who requires clean air and wholesome food and a roof over their head, who has responsibilities to themselves and others, and who is always open to the notion that they could be wrong. Art (writing) that lives up to this responsibility (as opposed to looking for an audience or trying to be hip, for instance) is what I believe in.

Bottom-line: Pessoa wrote for himself, and, yes, heteronyms are irresponsible and lead to madness. Where's Ovid and Yeats by the way?
Publicada por Manuel Antão à(s) 1:38 da manhã Sem comentários: