The more I read Malfi, the more I want to read him. He's about to become my discovery of the year. He's able to surpass genre limitations/expectations, he never takes an easy way out and his dark fiction is exceptionally well written.

The transaction between reader and text that creates what I like to call the "horrific effect" is complex and to a certain extent subjective. Although the horrifying event may be quite overt, a death, a ghost, a monster, a killer, it is not the event itself but the style and atmosphere sourrounding it that creates horror. It's the atmosphere that suggests a greater awe and fear, wider and deeper than the event itself. This is what makes a Dark Fiction novel stand out from the crowd as far as I'm concerned.

In a superior novel, there is a sentence, a word, a thing described, which is the high point. For me the "click" happened here:

"I didn't necessarily believe in ghosts, but I did believe in the power a place could hold, could retain, and how the land resonated with echoes of its past. Charles had once told me that sometimes the places where bad things happened would suck up that badness like a sponge sucks up water. The badness gets stuck and rots and becomes like a stain, even if you couldn't see anything. An invisible stain, like on cop shows on TV, and how even after blood is cleaned up you can still find it with a black light."
Dark Fiction isn’t only about tales with zombies and werewolves. There is also room for stories about the horrors of everyday life.

"Luther: The Calling" by Neil Cross “Closure may never come. And if it does come, it may not be what you were hoping for.”

Zoe, when referring to Luther: “So I tell him this, all about myself.  Then I ask him about himself, and he tells me about books.  As if he's made up of all these books he's read, or was going to read.”

My first Neil Cross, and it won’t be my last.

I’m not familiar with the TV Series. This book, I’m told, works as prequel to the series. I’m going to rectify soon the fact that I’ve never seen it.

I was not prepared for it. There was a lot of gore, including the deaths of animals and children. The book is ghastly, gory and not for the faint of heart. Would I still recommend it? Without a shadow of a doubt. It’s a solid Crime Fiction (Horror?) novel that manages to be a great addition to the genre with no pretensions or designs to be anything other than being a piece of wonderful Crime Writing.

Literary styled books aren’t usually my thing. They normally take all the good stuff out of the book and replace it with tedious narrative passing off as deep and meaningful prose.

“Literary” books (aka “mainstream” literature) are usually weighed down with this needless stuff. While reading “Luther: The Calling” I had the feeling that I was reading something not quite-genre-oriented, despite all the Crime Fiction trappings used. At its core there wasn’t really anything new but all the elements were presented in such a fluent and elegant and minimalist prose that I couldn’t help but go along, and not caring whether the plot was predictable (which in a way it was).

Luther and Zoe’s relationship and interaction was what kept me glued to the pages. It all felt so damn real… Without getting into personal territory, I felt for Luther. And the way it was written, I could see how Luther had become who he was. I became engrossed, watching John Luther’s life fall apart. It was like watching a train wreck.

The personal story between Zoe and Luther was just so real that I couldn’t help but empathetically self-reflect.

"The Lock Artist" by Steve Hamilton My first Steve Hamilton, and it won’t be my last.

While reading this novel, I started thinking about literary devices, namely telling a story backwards: telling me who the culprit was but not who was killed and why, jumping back and forth, and then slowly explaining the details.

What draw me in in the first place was not the protagonist, but the novel’s structure. Hamilton divided the narrative into chunks apparently without taking notice of events, but with an eye to narrative tension and dramatic effect. Off the top of my head I can't think of many other crime novels organized in this way. Nevertheless various narrative threads in this novel are pitch perfect, as well as being able to deepen the connection between structure, protagonist and subject matter (hopping between three timelines:  present day, where Michael is reaching the end of his jail time, the series of events that led him to learn how to unlock a safe and his brief history as a professional safe cracker).

Another clever literary device was the way Hamilton captured me by using Michael’s narrative voice.  It’s quite unique, because it allowed me to be drawn into the story and made me want to keep reading to discover what happened to cause him to stop speaking.

The novel’s denouement, all by itself, justifies reading it. It was masterfully done. Hamilton was able to put us in Michael’s shoes when it was finally revealed what had happened so many years before.  I found it as cathartic as Michael did. What more can one ask for in a novel?

Where does the Noir come in? Hamilton refused to sentimentalize and trivialize Michael’s character, even if, at the end, there exists a small ray of light entering his noirish existence. No matter. It’s still one hell of a book.

Reading this novel, turned out one of the most pleasant reading experiences in months. And perhaps it might be necessary to explain 'pleasant' here: the word does not necessarily mean that one is comforted, has fun in the usual meaning. Book-wise it means, at its best, to be challenged. That’s what the best literature does, be it SF, Crime Fiction, or what-have-you.
Publicada por Manuel Antão à(s) 2:23 da tarde Sem comentários: My first Philip Pullman, and probably my last.

When I read a book I don't like, I usually figure it's just not for me, and I have different tastes, blah, blah, and move on. Not this time. The novel "deserves" a few notes.

Philip Pullman has awfully combined two of the greatest conundrums of modern science, dark matter and the nature of consciousness, into one very week element within his narrative, and has connected it with the transition from childhood to adolescence. After all this is a YA novel.

Pullman's suggestion is that children are not fully self-conscious until adolescence. This premise is nonsense, even for a book. Pullman's claim is that these elements of consciousness start streaming into the children and their daemons settle into a fixed form. Uhm...Come again?

All those elements could work if the execution was any good. Unfortunately it's pretty awful. I know this a YA novel. Pullman's intension was for the book to be read by young adults and maybe even the younger set. Even so he can be faulted for style and narrative (LeGuin's The Earthsea Trilogy, Heinlein's Have Space Suit - Will Travel,  John Christopher's Tripods Trilogy, Kurt Vonnegut's Welcome To The Monkey House, Douglas Adams' Hitchhikers Guide To The Galaxy Trilogy, and Jonathan Letham's Girl in Landscape come to mind in terms of almost faultless execution).

After a good start set in an alternate universe things slack down and became completely predictable. Despite a few scenes that could have been tense, I never felt the suspense growing, only the boring level growing by virtue of introducing repetitious literary devices , like the phrase: "She was horrified..".  Character-wise is also where the novel really fails.The characters are nothing more than cut-out cardboard cliches. They are not gripping. The conversations are often painful to read. And the adventures? Yawn.
Publicada por Manuel Antão à(s) 2:24 da tarde Sem comentários: 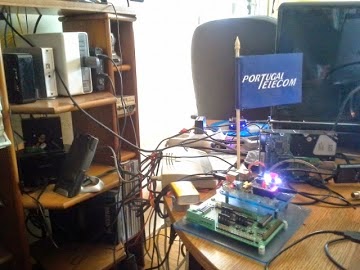 Finally my own Raspberry has a motor attached to it (on the picture above the matchbox is pinned to the top of the motor)...Main goal: to have a moving Raspberry Pi in the long term. Lot of work still ahead of me.As a teaser, a video with the developed cockpit:

And another one from a different pespective:

Happy hacking. You don’t learn to hack – you hack to learn…

"The Angry Dream" by Gil Brewer I'm having a Pulp Writers binge right now, and I've always wanted to read him. What better time than now?

The best Noir can be a far more intoxicating experience than I can find reading almost any other kind of Crime Fiction. Why? Well, I think it's because it exposes truths about the human condition that other types of Crime fiction barely hints at. There’s a fullness in the best noir fiction that’s almost impossible to find elsewhere in genre fiction.

The narrative here is so crepuscular that it often feels like there are entire chunks of text missing. In one scene, the novel's main male-character is standing in his house, and in the next scene he will suddenly be in his car (with nothing in-between). There also several instances where a character will repeat something that no one has previously said.

I'm not the typical noir reader. I like to read true noir. I'm not willing to accept something that has a noirish feel, but still craving for a happy ending, or at least an ending with hope. I like Noir Fiction where I fell there's no hope whatsoever. While reading this novel, at times I felt I was reading a Noir Pastiche.

Unbelievability is this book's main sin:

Noraine,  "her ever-eager body made me forget that she always meant trouble. But this time I couldn't forget. A man lay with his head blown off and she was holding the gun..."

Lois, "the hot-tighed lush whose big kick was racing through town as fast as her souped-up car would go, hoping that maybe someday she wouldn't be able to swerve away from the stone wall at the bottom of the hill..."

Jeannie, "there was a time when her body was fresh and firm and lovely; but now she was making her money the hard way - in the small back room of a sleazy neighborhood bar..."

All of the above three women are keen on killing the guy... In sum, conventional noir ... that crashes and burns.

I'm not sure whether this novel can be viewed as a template for his other novels. If that's the case, this one was my last Brewer.
Publicada por Manuel Antão à(s) 2:25 da tarde Sem comentários: