“No, no, no life!
Why should a dog, a horse, a rat, have life,
And thou no breath at all? Thou'lt come no more,
Never, never, never, never, never!
Pray you undo this button. Thank you, sir.
Do you see this? Look on her! Look! Her lips!
Look there, look there!”

King Lear is a typical example of that millennium generation. They retire when they’re still young enough to make the most of it. Undoubtedly they’ll have a fat pension as well as 100 knights and a fool like myself to amuse them (with reading out loud, for example), probably a free bus pass and winter fuel allowance too. I don't get to retire till I'm 65, if I don’t die first from burnout. How do you I can carry Cordelia around in 15 years' time when my knees are already done in? That was the feeling I had when I was watching this play with Antony Sher, who seems very fragile. That’s why at the end we see Lear and Cordelia on a pedestal… I’m not sure the same won’t happen to me. Despite all the productions miscasts and misgivings, but those of us in the audience, willing to probe the depths of the human soul, will be paid dividends by a watching this dying art called “theatre”. The actors give everything they have (Sher was sweating as if there was no tomorrow…). For me, the actor (be it a Shakespearean actor or not), is, at heart, a seeker after truth. And that truth is the human soul. Every time I go to the theatre to watch a Shakespeare play, a part of me believes I’m closer to that “truth”, whatever it is. 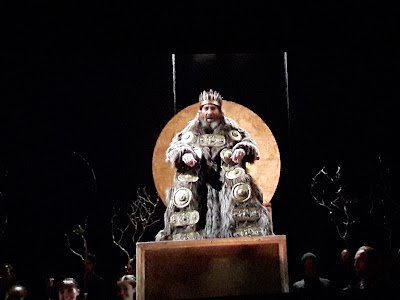 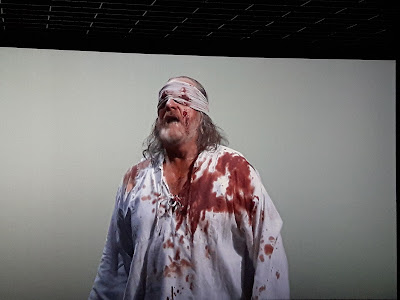 Having said that, I still think Doran’s choice to have both Lear and Cordelia on a pedestal was a wrong one. The final scene of Lear, from his entry with Cordelia dead in his arms, is the greatest in all Shakespeare, in all dramatic literature. I don’t have any kind of qualms in saying this. Now imagine you are watching the RSC at Stratford-Upon-Avon in 2016. You know the story of Leir and his daughters. If you’re a Shakespearean you probably read it in Geoffrey of Monmouth, or maybe you only know it from the play of about 20 years ago, “The moste famous Chronicle historye of Leire king of England and his Three Daughters”. You also have imprinted in your mind what happens in the end: Cordelia lives, Lear is restored to his throne. And then enter Lear with Cordelia dead in his arms. It's the most visually arresting moment in Shakespeare's works, even before Lear begins to speak. Now imagine my surprise when I see a pedestal with both Cordelia and Lar on it. I literally gasped and almost jumped in my chair to vociferate “bloody murder”! We are not sure how often Lear was revived in Shakespeare's lifetime (he rewrote the play at least twice, as far as I remember reading somewhere). I think it was Charles Lamb who wrote that the original version was unstageable or something to that effect, we also know what Tolstoy said about Shakespeare’s play (suffice to say he much preferred the anonymous “King Leir and His Three Daughters”, the prick). 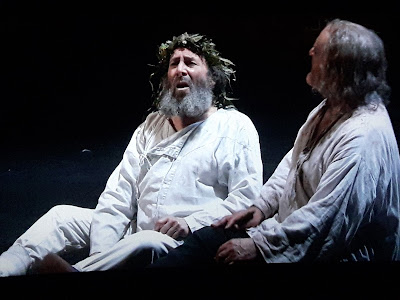 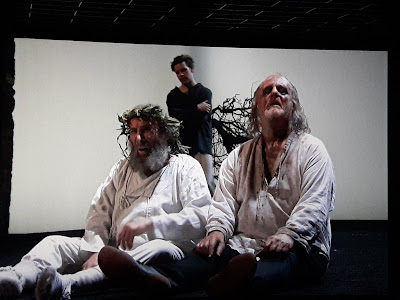 It took over many years for us to be able to look the truth in the eye as Shakespeare wrote it. (I’m not even conserving the fact that Henry Irving's version omitted the blinding of Gloucester…)
I’ve always believed (or chose to believe, I’m not sure which) Lear dies thinking that he has seen Cordelia's lips move. This way it’d parallel the death of Gloucester as well, who after all his griefs is killed by excess of happiness (or rather "'Twixt two extremes of passion, joy and grief") on finding his son still alive and being reconciled to him. It would be the final cruel blow inflicted in this play by the mocking heavens whose gods uttered "kill us for their sport." I think that's what horrified Tolstoy, a committed Christian. But Shakespeare stayed true to his tragic and agnostic and unreligious vision, staring unblinkingly at the truth. There had been nothing before like it since Sophocles. It's a Greek tragic vision of life that could only be fully understood in a post-Christian era.

I wanted to like this production a lot; I wanted to love it; I wanted to praise the heavens for having seen it, because I very much like Anthony Sher, and felt his portrayals of Falstaff in the Henrys were excellent, but unfortunately I left feeling that it just doesn’t have the intangible magic it needs to be great (I believe Sher no longer has the physical capacity/stamina for this role). As to the actors, Byrne was one of the best Kents I've ever seen and Troughton was also magnificent. Just imagine a world in which actors like David Troughton (or David Bradley!) are offered Lear at the RSC…). Paapa Essiedu's Edmund was a bit incoherent. He didn’t sound like the Edmund “I know”.

Let’s turn to Regan and Goneril. How can I say this without sounding offensive? I don’t understand how they are with a company like the RSC. Neither actress permeates their role with the carefully measured metamorphosis from exasperated daughter to filial impiety to, ultimately, fratricidal frenzy that the text demands. I know they’re not easy roles, but here they are both bitches from beginning to end. That’s not what’s in Shakespeare’s text. Sorry. I’m a Shakespeare die-hard. If it’s not in the text, there must be a bloody good reason for being staged that way. With those two, I don’t understand how they stayed the same during the entire play.

Personally, I go to the RSC expecting to see 'world class' acting and 'world class' productions and this King Lear is far from either of those. It’s actually disgraceful that the RSC should present such a poor production of such a great play. If you’re not a Shakespeare buff, you’ll probably love this production (there were a lot of those in the audience). If you’re a Shakespeare die-hard, you’ll save your money, find a DVD copy of Ian McKellen as Lear and enjoy yourself!