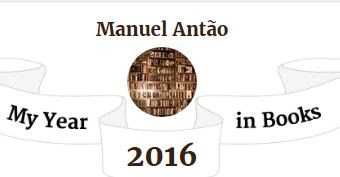 And the year ends once again...

Without further ado, my crème-de-la-crème was the following: 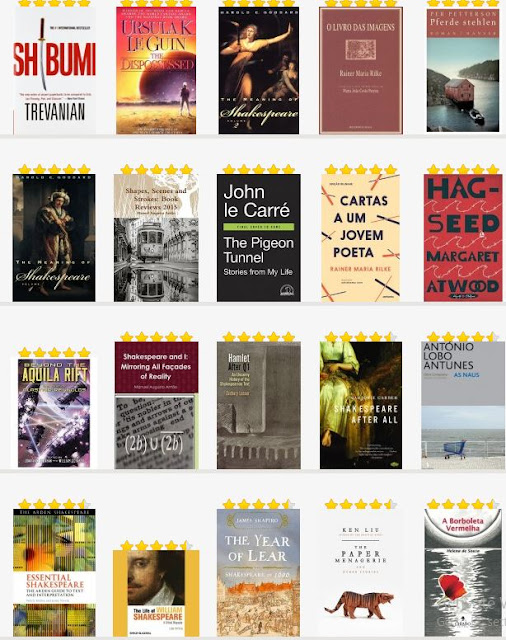 Links for each one of the reviews (in no particular order):

The Immortal Bard: "Asimov’s Guide to Shakespeare" by Isaac Asimov
Shakespeare Downheartedness:"The Meaning of Shakespeare" by Harold C. Goddard (2 volumes)
Shakespeare Meets Star Trek TNG: "The Annotated Shakespeare" by A. L. Rowse
"Shakespeare and I - Mirroring All Façades of Reality" (Preface) by MySelfie
"Shakespeare and I - Mirroring All Façades of Reality" (Table of Contents) by MySelfie
Articulated Shakespeare: "Shakespeare After All" by Marjorie Garber
The Portuguese Soul: "As Naus" by António Lobo Antunes
Erhabene Poesie: "A Borboleta Vermelha" by Helena de Sousa
I Will Get a Lot of Stick For This But...: "Shapes, Scenes and Strokes: Book Reviews 2015" by Myselfie
Re-Imagining Rilke's Metaphor in Portuguese: "O Livro das Imagens" by Rilke, Maria João Costa Pereira
Câmara Obscura Literature: "The Pigeon Tunnel - Stories from My Life" By John Le Carré
Creating a Private Space: "Briefe an einen jungen Dichter/Cartas a Um Jovem Poeta/Letters to a Young Poet" by Rainer Maria Rilke, José Miranda Justo
Silence In a World Full of Sound: "Pferde Stehlen" by Per Petterson
Anarres vs. Urras - Ambiguous Walls: “The Dispossessed” by Ursula K. Le Guin
Steampunk Riff SF: "Revenger" by Alastair Reynolds
Enter the Ghost in his Nightgown: "Hamlet After Q1 - An Uncanny History of the Shakespearean Text" by Zachary Lesser
Monotony is anti-Shakespeare: "Hag-Seed - The Tempest Retold" by Margaret Atwood
Making Shakespeare Intelligible to Modern Audiences: "Essential Shakespeare" by Pamela Bickley, Jenny Stevens
I’ve Been Rabbit-holing and I Just Came Out On the Other Side a Changed Man: “The Life of William Shakespeare: A Critical Biography” by Lois Potter and J. Paul Guimont (narrator)
A Good Year for Shakespeare but an Awful One for England: “1606: William Shakespeare and the Year of Lear” by James Shapiro
Mono No Aware: "The Paper Menagerie and Other Stories" by "Ken Liu
Authority Without Domination: “Shibumi” by Trevanian
Coding Languages vs. Natural Languages: “Story of Your Life and Others” by Ted Chiang

2016 was also "the end" of my Shakespeare quest. We commemorated the 400 years of Shakespeare's death and this special anniversary year was a truly unique opportunity to complete my quest of reading the rest of his entire body of work.

On with the rest of the numbers.

NB(*) The number "90" corresponds to the number of reviews including all the Shakespeare plays read (only 62 book reviews written). 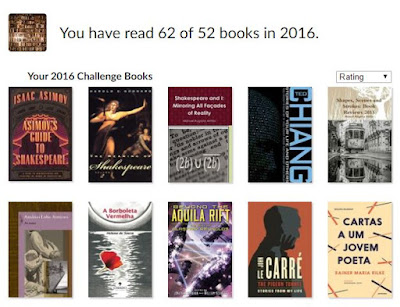 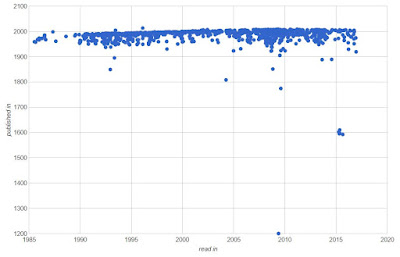 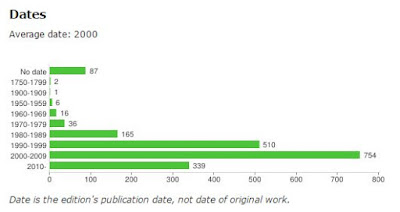 Number of books read per month: 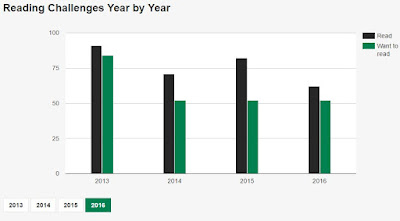 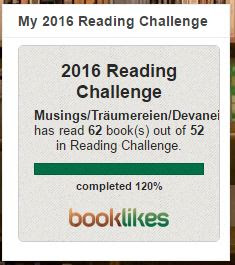 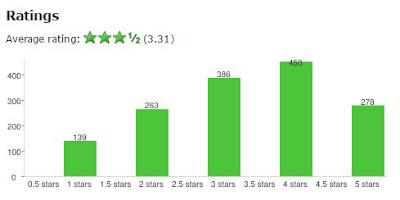 Blog Hits Around the World (BookLikes):

Blog Hits Around the World (the blog you're reading now):

Number of posts written between August 2006 and December 2016:

I have a few, namely re-reading books that somewhat "changed me" (tall order I know...Middle age turns almost everyone bourgeois. A life that is more meaningful than comfortable is something only the young can aspire to. Once the aches and pains set in a comfortable life begins to look attractive, but I'm still bourgeois, last time I checked), and the bible (in German and English).  I'd say that books have always changed my life, an endless source of information that I don’t think is so indelibly printed when only watching television, which I almost stopped doing altogether. To name a few: Wind in the Willows (K. Grahame), Pears Cyclopaedia, On the Beach, etc. (N. Shute), Kon Tiki, Aku Aku, etc. (T. Heyerdahl), Seven Years in Tibet, etc. (H. Harrer), Gods, Graves and Scholars (C.W. Ceram), naturally Harry Potter (J.K. Rowling), Agatha Christie, and Robert Harris. In general, architecture (particularly Art Nouveau) archaeology, ancient and lost worlds, (here von Däniken has some interesting theories) art up to about Art Deco – (Hundertwasser is an exception), and naturally, the natural world, "The Unpleasant Profession of Jonathan Hoag" by Heinlein for suggesting our world is darker than we can imagine.

Sorry for going on a tangent here. This is after all a Year in Review for 2016...I'll stop right here. If you feel so inclined, there's more here. And I haven't even began to write about my SF book haven...

Etiquetas: 2016: My Reading Year in Review

Are a bunch of those stats from GR? That is yet another thing that Booklikes really lacks, a good stack of stats!

I've still got several books to finish, so I'm holding off writing a December/Year End post. I'm thinking of doing a december wrapup this Saturday and then a year wrapup on Sunday.

And I really liked that your average review was just over 200 words. Because that is what mine averages out at and that is WITH a synopsis :-)

I get jealous of the stats that GR gives you. and the pretty pictures. I am able to recreate most of the stats I want using my calibre library and some fingerwork with my calculator [yearly averages, etc] but my goodness, that is work.

I'm on GR just to follow a few people but I'm not adding books. I briefly thought about adding ratings and a generic "I hate GR for suppressing free speech" kind of review for every book, but then realized that I don't want GR to have ANY of my data. Which is silly really. Thank goodness there are alternatives.

On my 2016 in review post, you mentioned you used a lot of plugins here. Which ones do you find most useful and most fun?

Hey, you doing ok? No posts or comments or anything for a month.

Thanks for the concern Book Stooge. Still recovering from Winter.