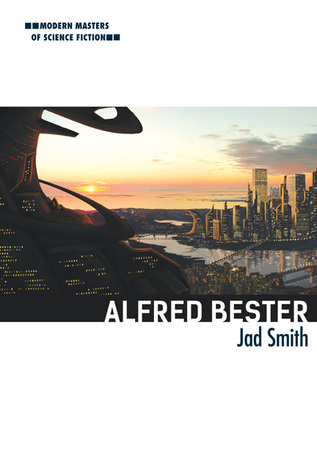 “These stories not only show Bester’s writable approach in the making but also reveal that his aesthetic had its roots in bricolage, or the practice of drawing on heterogeneous sources and writing styles to create unexpected narrative tensions and unities. Bricolage works by a logic of excess and encompasses more local strategies such as extra-coding, pastiche, intertextuality, and allusion. By definition, it re-orders reading protocols, requiring the reader to switch codes and synthetize incongruities.”

In “Alfred Bester” by Jad Smith

Alfred Bester was the first postmodernist SF writer. I won’t dwell on it again. If you’re interested, you can find additional information here.

I haven't been an adolescent for quite some time, but I still remember sitting in stone stairs in the side yard of my mother’s rural home in Alfaiates. I had just seen Star Wars and so my eyes were devouring a twilight sky waiting for the stars and planets to appear. This was my gateway to the imagination. In my unsophisticated mind, once so consumed by simple mysteries written by adults about girls not much older than myself, something unfurled. I began to see a world so much bigger than my own, and not just the universe laid open before me. SF made me think beyond myself, perhaps for the first time, and I became alive with ideas, possibilities. In this world, I could spiral deep into my own psyche or travel out to infinity. It was a spark of light in the night and I followed it.
I used to read a lot of it when I was younger. But now I find it deeply embarrassing to stand in a FNAC bookshop (for instance) surrounded by silly, trite fantasy, endless Star Wars novelisations and comic books. Sure, there's some great SF out there dealing with the human condition the same any good fiction is, but it's drowned under a sea of pre-pubescent dross. It's devoid of ideas. In fact, the last time I tried to pick up a novel by Ian McEwan, it was full of ridiculously named characters and convoluted plots. Therefore, I for one can't be bothered with it.

Consider as well Vonnegut's “Slaughterhouse 5”, Le Guin’s “Left Hand of Darkness”, Atwood's “Handmaids Tale”, Bester’s “The Stars My Destination” or any of Iain Banks output. There are simply no finer writers in the English language and just look at the questions they raise about perception, sexuality, morality or entrapment. Consider Nivens or Heinlein musing on different societies. Sparser prose and less "literary" but no worse than Hemingway. Critics are by nature critical and veer between seeking shock value and taking comfort in the style of the classics, and SF rarely fits those bills. I for one will continue to read SF along with other modern works.

This leads us to Bester. Jad Smith shows us he had a very pronounced tendency to pepper his stories with verbal motifs that repeated with slight variations, which always reminded me of old Irish fairy tales. As Jad states:

“His fiction of the fifties is re-readable not merely because of its inventiveness but also because of this complex patterning, which over-determines the reader’s experience, even the second or third time around. Bester produced this sense of excess through bricolage and pastiche that mixed up and hybridized reading protocols, and through various types of extra-coding – allusion, nonstandard orthography, language confusion, synesthesia, and mixed-viewpoint narration, to name just a few of his narrative strategies – but the reader-centered, writable patterns he created mattered more than any of these ‘pyrotechnics’ alone, as his later career demonstrates.”

Jad’s analysis of Bester’s two major novel-length works (“The Demolished Man” and “The Stars my Destination”) is one of the best I’ve ever read. Too bad Bester was then offered a lucrative job writing journalism for Holiday magazine, and he took it because he saw SF as just another job (and a badly paying one at that). He didn't return to SF until Holiday magazine folded, 25 years later, but that was way too late. The inner fire had extinguished and what he did produce later was just crap…

I have to admit, those quotes from the book where Smith talks about Bester's style make no sense what so ever to me. It feels like when I listen to 2 car mechanics talking: they are using "english" but specific words that only have meaning within the context of a modern vehicle.

" which over-determines the reader’s experience"
Now what is that even supposed to mean? If you could interpret the quotes you included, that would be helpful.

I read The Demolished Man in highschool and I'm not sure I was ready for it. My main memories are thinking that it was about a rich guy with some real brains thinking he was above the law and being proved wrong. I was not impressed back then. So I can't tell if my iffy'ness in how I feel about the quotes here are because they're actually a bunch of specialized nonsense, or just because I'm not a fan of Bester.

It is too early in the morning to be thinking this much...

I've been there as well my friend. In the morning everything seems a little fuzzy...

When I write about Seriousness in literature, I'm basically talking about death, the human condition and shit like that; pointing out that in SF, the rules governing death (and to some degree "the human condition") tend to be vastly more flexible than in the real world (and by extension in literary fiction). Without a "realistic" engagement with the fact of death, books tend not to be considered Serious.

With that said, there is an awful lot of SF that I just can't get on with - largely because it seems to have been written by free-dreaming maniacs with an active callousness towards ordinary, grammatical prose. Alfred Bester is actually a pretty good example of this. 'The Stars My Destination' is a rollicking good read, but there are large sections of 'The Demolished Man' that make you wonder whether he could actually write bum on a wall.

In Europe we tend to take SF very seriously, perhaps because we have a more complex attitude to popular culture & perhaps and because we like philosophical novels of ideas.

I think (I emphasize the word "think") Jad Smith is telling us what it means to play with intertextuality between several SF texts, and in that regard Bester does it wonderfully. He messes with my head, but in a good way. Reading Bester makes me think about other SF texts...That's intertextuality for you.

Thanks. Explaining what "intertextuality" means helped a lot. That and I've had some caffeine, so my brain is slowly getting into gear now :-)

You've got me curious now about Bester. I'm wondering about putting "Stars" onto my kindle.

Not at all my friend.

I'm always on the lookout for SF of a different kind, because I'm sick and tired of the crap I used to read. People who don't know any better confuse sci-fi with the dreary swords n' magic dross churned out by the like of David Eddings,(may a comet land on him); this is imprinted in my memory; I've tried to get rid of it, but to no avail: "Urgit,High King of Othol Murgos,sat on his garish throne in the Drojim Palace of Rak Urga" -Book 5,(5,fercrisesake) of the Malloreon. This witless guff sells by the million to people who find The Hobbit a bit of an intellectual stretch...

I don't know how much you know about him, but from what I have gathered, it wasn't that he was a hack but that he was willing to write like a hack to see what people would stoop to. If you read his "bio" on some of his early books it talks about "his experimenting with certain literary styles and mechanics". Which means that he forged a formula and then just plugged in the numbers and waited to see if people would read it or call it for the crap it was.

I liked his Elenium and the Belgariad and had mixed feelings about the Mallorean. Everything else of his, didn't like it. I was kind of glad when I heard he had died because his last series, The Dreamers, was just an embarrassment. Both to him and to the people who read it and liked it. I'd like to think he knew it was dross and was just making a living but that might be biased as the Elenium was one of the foundational fantasy trilogies for me as a teen.

I didn't know Eddings did things the way you described. I'm never terribly familiar with writers I don't like. At the time his writing seemed to be formulaic in the extreme.