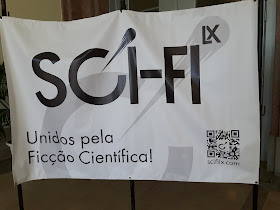 A reason for Portugal's relatively low profile in the English-speaking world vis-à-vis its neighbour Spain is that -- at least not since William Beckford -- the country hasn't had as many high-profile Anglo or foreign writers celebrating it. In Spain, the rich tradition runs from George Borrow, Géricault, Richard Ford, Gerald Brenan, Orwell and Hemingway to Chris Stewart, Cees Noteboom, Ian Gibson and Michael Jacobs (leading to disgruntlement in Spain that the country is often viewed through romantic, yet ultimately foreign eyes). By comparison, the anglo writers on Portugal (Marion Kaplan, Richard Zimmler, Richard Wilson) offer decent enough insights, yet are not literary heavyweights, while Zadie Smith's “Alentejo Blue” did little justice to the Alentejo.

Likewise, while Portugal has exported footballers successfully, it has fared less well than Spain regarding cultural icons. Generally, recurring themes are anachrony, disjuncture, loss-of-glory, timelessness (Wim Wenders' Lisbon story focusing on this, António Lobo Antunes hallucinatory prose on the subject). Saramago is the obvious star, and is also the most rewarding writer to consult on Portuguese/Spanish tensions: he enjoyed a self-imposed exile in Lanzarote, occasionally courting controversy with rampant pan-Iberianism (his 'união ibérica', and suggestions that 'Portugal could only benefit from joining Spain' infuriated his countrymen!), while his marriage to Pilar del Rio was the perfect way to eschew the maxim 'de Espanha nem bom vento nem bom casamento' (From Spain, neither good wind nor good marriage will come). Paraphrasing Eduardo Lourenço, one of our leading Portuguese essayists, we suffer more from a case of excess of identity (Portugal is one of the oldest countries in Europe) than from a lack of identity. The Spanish ruled Portugal from 1580 to 1640, when they were barely the country we've came to know as Spain these days. Our problem is mostly with ourselves and with Africa. The whole decolonization process is one of the main themes of Portuguese contemporary fiction.

Portuguese writing suffered lots of influences, not so much from Spain but specially from France (XIX-early XX century). We must remember that Portugal was under the French influence as early as the French Invasions in the XVIII century. And as a country we were always very independent, even in our writing, distilling influences and allowing very little in - other than the obvious vocabulary and style influences. I think our literature remains original and set apart from the rest of Europe, and from Spain as well. Portugal has a lot of proximity, in my opinion, to a fringe of south American literature, like Borges and Marquez. Not so plush as those, but very intelligent and closed up on itself.

As every Portuguese knows very well, we don't relate to Spain at all... friendly neighbours may we be, but not brothers at heart...

NB: I could tell you about Valter Hugo Mãe, who is also a considerable poet, Lídia Jorge, with her post-colonial insights, Mário de Carvalho, surely one of the best analysts of the contemporary Portuguese quotidian, and Agustina Bessa-Luís, a classical writer who is definitely Portugal's greatest novelist. Watch out for Gonçalo M. Tavares, who only started publishing at the age of 31 and has published, in the last 7 years, at least, 22 books. He's currently being translated all over the place. 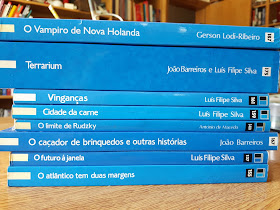 (Some of my Caminho SF books)

What about Portuguese SF writers? We have a few, but they’re only known in the portuguese SF tribe: João Barreiros, Luis Filipe Silva, António De Macedo, Cristina Alves, Carlos Silva, Telmo Marçal, Victor Frazão, Mário de Seabra Coelho, Marta Santos Silva, Daniel Tércio, David Soares, Filipe Faria, Inês Botelho, João Aniceto, Jorge Candeias, José Saramago, Madalena Santos, Miguel Neto, Nuno Neves, Sandra Carvalho, José Manuel Morais, João Paulo Cotrim, Manuel F. S. Patrocínio, etc. Why don’t we read portuguese SF? This is not a case of not reading Portuguese SF. We don’t read. Period. There’s an urban saying we the Portuguese don’t read because the books are expensive (most new books coming out now might cost at least 15 euros), but I have some difficulty believing that.  What I think is that art, and literature in particular, requires a certain intellectual maturity and familiarity with the language that can hardly be acquired without some culture and education, something that neither abounds nor has ever abounded in our secluded seafront. If wed don’t read the so-called mundane fiction can we expect a vast readership when it comes to SF? Not in a million years! I am not saying that the book price does not influence the number of books bought by those who are interested in reading, be it SF or mundane fiction. Nor do I reject that the publishers may have a net benefit with a fall in prices and a corresponding increase in the market; it’s possible, but not very likely. But the steep price is no excuse for anyone who has not read anything at all for a year. Probably most would not have read anything even if someone paid them to do so. If I were to run a poll on the street, I believe the possible answers to "why the Portuguese do not read?" would be:

A) We are terrible busy and consequently do not have time to read;
B) We don’t have any money to spend on frivolities;

No one would answer:

C) Because I'm a bit of a troglodyte.

Especially when he or she is not guilty of being unaware of his or her own rusticity.

Now, to finish off with a tangent: call me reactionary; If the only thing you read is rubbish we’re better off not reading anything at all (lots of Portuguese Contemporary Fiction is rubbish to say the least). There is nothing inherently helpful in translating scribbles into ideas, unless those ideas have some substance. To make a point, as I have already heard somewhere else, is that it is through the habit of reading Margarida Rebelo Pinto (one of our leading Contemporary writers of the lite-literature of the crap variety) that one may arrive at AntónioLobo Antunes; this is tantamount to saying that it is by the habit of hearing Lady Gaga that one arrives at Bach. That's not quite the way it works. 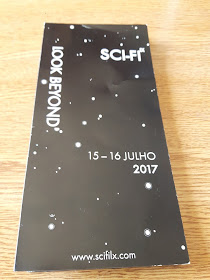 Most of my Portuguese SF friends (the Tribe) only read SF in English. I’m one of those cases. But I also read Portuguese SF written in Portuguese. What I don’t do is read Anglo-Saxon SF translated into Portuguese. With a only a few exceptions, most of the guys translating SF into Portuguese are not conversant with the genre conventions. Forget it! The question of the prevalence of English-speaking authors in Portugal is thus unavoidable (because we don’t read SF in translation). In my view (and I presume, in the case of those with good judgment and enough SF reading in the bag), the notoriety of many authors who write in English is mainly due to the fact that this is the language that dominates the literary market around the world. I believe that if many of these Anglo-Saxon SF authors were Portuguese, born in Portugal and writing in Portuguese, hardly anyone would hear of them because they wouldn’t stand a chance in hell of being published. Hence foreign authors (English or any other) are not synonymous with quality; at most, they’re posters of popularity (two things often confused) - Vide my review of the latest Brian Staveley. In the same circumstances, were the Portuguese language to occupy a more dominant place in the world-wide literary market, there would probably be enough names of Portuguese-speaking authors on the bestsellers' lists (of course, some with merit and others only to take advantage of the hitchhiking of the language). What about the question of the role of publishers in the dissemination of Portuguese authors (in any literary genre)? Publishers have to make money to publish, and they have to publish in order to make money. It is the vicious circle of the commercial system which unfortunately excludes national works of potential quality and commercial value. It is the financial risk and not the qualitative opposite that has the last word in the decision to publish a book (in my present perspective of the publishing market). What if the publishers were to risk more than what they do on the household names, i.e., in the almost forbidden territory of recent authors? Well, it would be almost a miracle if they just went on a limb by publishing unknown authors. Even the recent bets of two large Portuguese publishing groups of (pseudo) platforms of independent / new / unknown authors seeking to exploit this entryway to new names for purposes of mere financial gain seems stupid. These bets on new authors (digital publishing only) do not carry the same financial risks inherent in publishing physical books, and yet the business (as usual) seems specifically designed to exploit authors and draw readers near to those who pay for print books. What can I say? The absurd transcends the boundaries of ridicule.
Authors need readers, and readers need authors. Despite the explosion of independent authors in the digital market, publishers still play a key role as intermediaries in this relationship. If readers are always presented to the same authors (independently of how they are good), readers will never know new authors (equally good or better).

What happened to the Line of Science Fiction by Editorial Caminho? I discovered lots of Portuguese writers by reading all the books published in this line of SF books.

There many worthwhile discussion panels, but the real treat was the one presented under the title “Enredos inacreditáveis” (“Unbelievable Plots”) moderated by João Barreiros and Cristina Alves; they gave us SF book plots and the audience had to guess the book title and author. All of my sweet spots titillated... 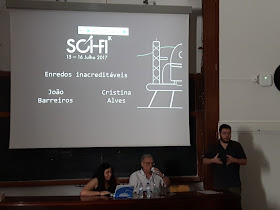 Some of the books we had to guess:

"The Deep" by John Crowley 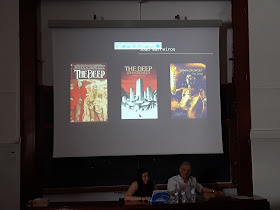 "The Windup Girl" by Paolo Bacigalupi 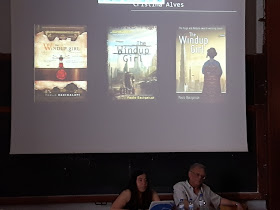 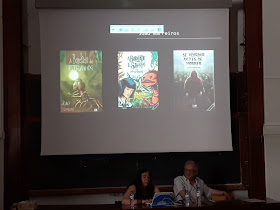 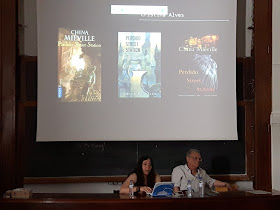 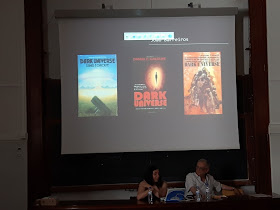 NB: This was the only book I couldn't guess the title and author... I've got to read it. 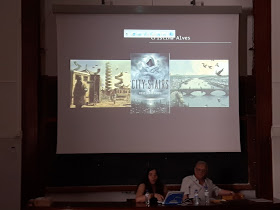 "Tales of Pirx the Pilot" by Stanislaw Lem 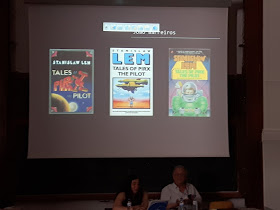 Also worth mentioning was the first presentation of the book  "Anjos" (Angels) by Luis Filipe Silva. 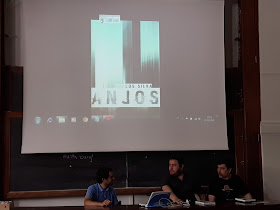 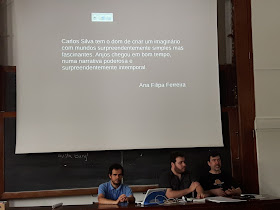 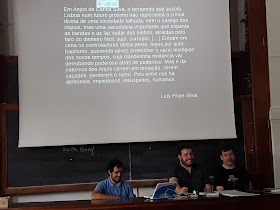 On another registre, Isaque Sanches' presentation on "The Bullshit Art of Game Design" was also quite interesting: 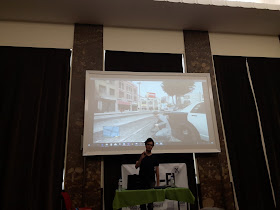 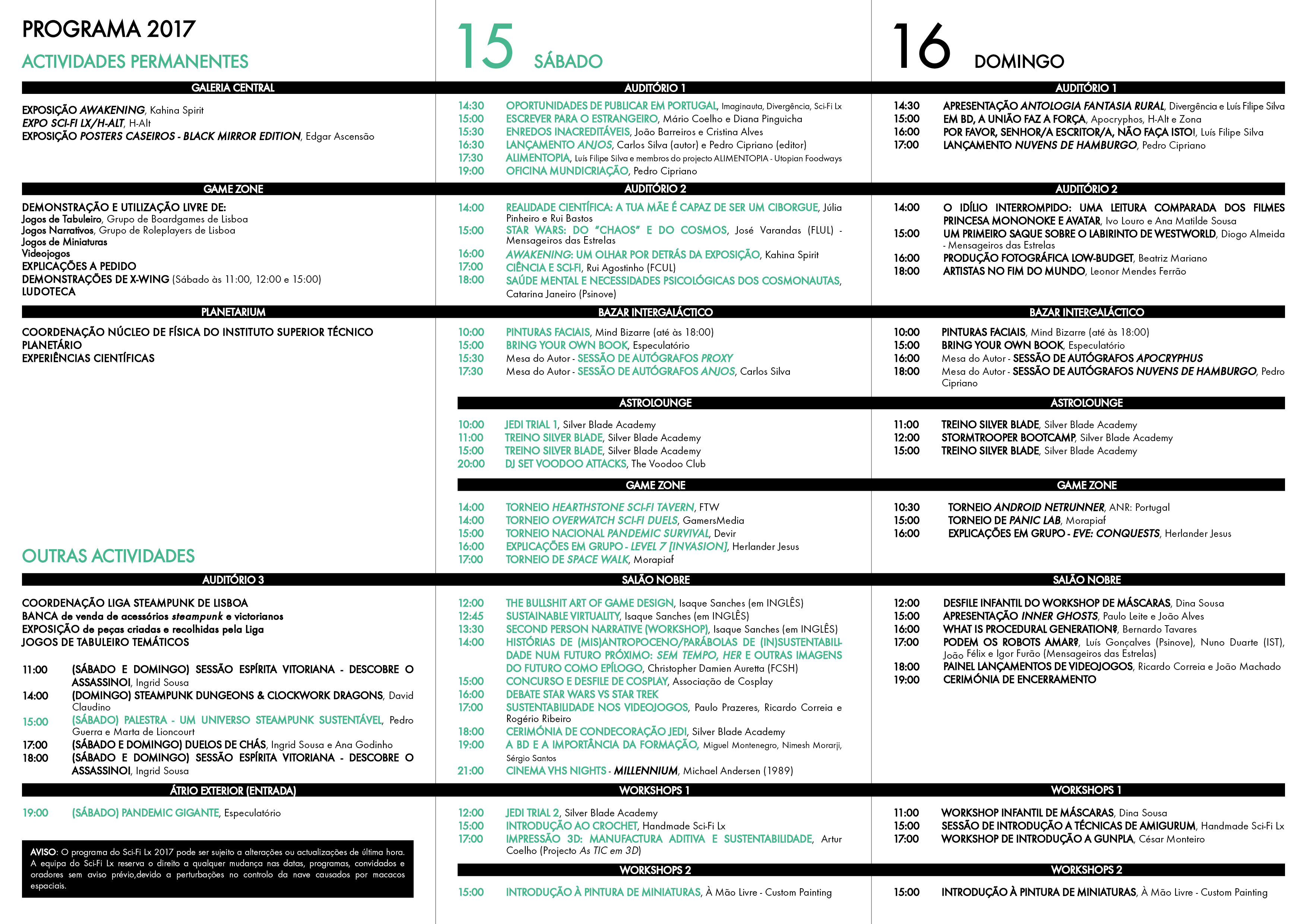