Literature as a Strengthener of Character: "The Cambridge Introduction to Shakespeare" by Emma Smith 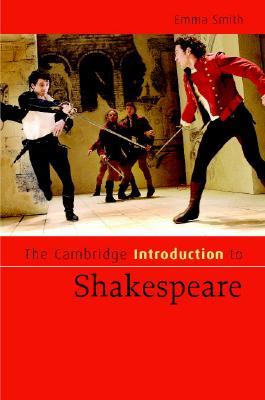 Cease to persuade, my loving Proteus!

The thing about drama is that everybody has to put effort in to learn their part, then they have to work together to make the play happen. Putting on a successful performance is very hard work but the buzz children get from the performance is huge and they learn that hard work is worthwhile. The play won't work without Titania, Bottom or Puck or all the more minor parts or the person who does the lighting, the scenery, the costumes. They compete for parts but work collaboratively to achieve a result and are proud of what they achieve. What better life lessons could children learn? There is bound to be a positive knock-on effect on other subjects.  Any good play, or musical, will do this but Shakespeare has huge scope and, generally, a large cast. This is a wonderful initiative. We owe it to our pupils to open up to their imaginations a world beyond our own shores and time. The 'Metamorphoses' speak to us about the fluidity of identity and have so much to offer to teenagers confronting this issue in their own lives. They can be read with Jeffrey Eugenides' 'Middlesex' as effectively as with Shakespeare. Emma Smith is right to point to the importance of the Philomela story for 'Titus Andronicus', but the many rape narratives in the 'Metamorphoses' present serious ethical challenges in the classroom. In teaching teenagers (and not only) respect for others, you are teaching them respect for themselves. That's the main point of school and home; in their rapidly-changing world (i.e. their intellect, their bodies) these are mainstays. These are what enable them to contextualise the attacks of commerce on their minds. And anybody who thinks that good literature and art aren't great strengtheners of character is missing the point; of course, they are, because they improve human intelligence.

Stage managed, manufactured vessels who are 'famous' for no reason other than having their pictures taken and heavily edited and being over-publicised by people you never see.

Why anybody thinks that this is in any way 'good' is beyond me, but young people see these people being rewarded and being rich and think that this is in some way a worthwhile pursuit, whilst people locked in a laboratory or grinding out groundbreaking research they don't know or care about.

It's a big, big problem in the social media age but one that the people who could address it won't. Ms. Swift have one, possibly huge advantage over Shakespeare’s Cleopatra et al: they are real and they are still alive. But alive they may be, but to the audience who will never see them, except maybe on a well-guarded stage a long way away, arguably not real. So, a fictional character could perhaps serve as well as a role model as a media created celebrity. Whether a sixteenth century fictional character will serve is another question, but characters from “The Hunger Games” and “Game of Thrones” are equally distant in time and space, so it might work. The question we haven't dealt with is why Viola and Rosalind would be better role models. I think they would be but, why would they?

As for Cleopatra, she was selfish, manipulative and self-destructive. She blithely brought about the death of thousands of Roman and Egyptian troops (not to mention her lover) for no reason other than her own desire for power. She brought about the complete collapse of Egypt as an independent country, then she topped herself. Not a good example. Although many people seem to subscribe to the myth of Cleopatra as either some floozy of the ancient world, a brazen strumpet and home-wrecker who spent her time in the beds of the most powerful men of the Roman world, or of Cleopatra as the ultimate hopeless romantic and ill-fated lover who died by her own hand, supposedly by snakebite.

At any rate, Cleopatra is infinitely more worthy as a role model for women of all ages than the "famous for being famous" Lady Gaga. The historical as well as the Shakespeare’s fictional Cleopatra was a truly impressive personality: not only did she survive the murderous intrigues of the Ptolemaic court, she was also an enlightened and compassionate ruler. One of her most famous acts was - at a time of drought and famine - to issue an edict opening the Alexandrian granaries to feed the non-Macedonian population of that great metropolis as well as the rural poor, which - despite alienating the Macedonian aristocracy and elite -secured her popularity with all the peoples of the kingdom. Her respect for Egyptian cultural and religious traditions, led to her being crowned as Pharoah - the first Ptolemy in generations to rule as both King/Queen of Alexandria and Pharoah of Egypt as well as the first Ptolemy ever to speak Egyptian. Considering that she came to the throne while still a teenager, effectively ruling alone in a world dominated by men she did extremely well - and if one includes Marcus Antonius' excessively generous gifts of large chunks of the Roman Empire to her, she certainly expanded the Ptolemaic Kingdom to its greatest extent in centuries. Had Cleopatra and the Egyptian fleet only stayed to fight Agrippa and rescue Antonius' blockaded fleet at the strategic disaster that was the Battle of Actium, she would have dramatically changed the course of Roman, and probably world, history. Cleopatra was unquestionably a brilliant woman in her own right - as well as being a polymath and a polyglot fluent in all the languages and dialects of her own kingdom (including Hebrew) - she was a highly effective ruler of a notoriously volatile kingdom whose capital was not only one of the largest cities of the ancient world but also one of the most ethnically diverse, and her tolerance towards ethnic minorities - such as the sizeable Jewish community of Alexandria - is legendary. Intelligent, compassionate, tolerant and courageous, Cleopatra VII ought to be a role model already.

The best role models are people who worked hard and achieved something, and unfortunately, our society does not prize such people in the same way that we do women who have big bottoms or men who inherit lots of money and play businessmen on TV. And that's why these forced role models ultimately won't work. We see those people dwarfing the accomplishments of those who work hard and intelligently to achieve, because they start out from a position of privilege. If women aspire to marrying into money rather than making it themselves, can you really blame them? It's literally the main lesson that our culture teaches.

I was lucky in that I had an inspirational English Literature teacher (Vicki Hartnack) who made Shakespeare characters relevant and, where possible, fun. I still remember the enlightenment she brought with them.

Still about Shakespeare, would it be possible, even at high school level, to combine the English department with the Drama department to show pupils a more rounded, less dry, view of his work? Acting out, and seeing acted, such complicated works may make them seem more relevant. After all the themes of love, vengeance, war, friendship, happiness, depression, destruction, comradeship, confusion etc. are still as relevant today, but merely reading them off a page as I did eons ago, doesn't bring the complicated plots to life, or explain them in terms of today's society. It seems to trap them in the past. Teachers like Emma Smith (and my own Vicki Hartnack), who try to bring Shakespeare to the fore, should be praised.

I agree with the point you are making but I do have to ask where you place personal responsibility in forming a person? Even if someone doesn't know HOW to go about being better informed, about life, music, literature, etc, etc, surely they could at least be expected to ASK someone else where they could start?

My beef is that so many people are content to be told X and to accept it, no strings attached. It's not that I want them to start automatically dismissing whatever they're told but at least give ONE thought to X.

I do agree wholeheartedly about making famous those who have big boobs, butts or other physical attributes that make them attractive. It will destroy a culture to have such empty icons as their center. The center will not hold.

Rejecting the notion of role models is an important message, not just for gender equality but for society in general. The trouble is that people are fallible. Peel away the layers and even the most celebrated people have their faults, and many are idolised based upon questionable values: Mother Teresa, hailed as a saint by many, drew significant criticism for her avenues of funding, whilst Donald Trump is hailed as a hero by many Americans principally due to his ability to accumulate wealth. We need to forget the cult of celebrity and aspire to positive values. "Warm, approachable and inclusive" would be a good start.

How depressing, when you think about it.

However, I think if you pretty much spend your free time watching crappy reality tv, reading crappy magazines and checking out 'entertainment' websites, the only kind of young women and men you'll tend to read about will be Paris Hilton and et al. It depends on how you spend your time - if you're into good books, journalism, politics or science you'll find a different calibre of woman or man altogether. If you look at shit, all you will find is shit, quite frankly.