Indistinguishable SF: "Nightflyers and Other Stories" by George R.R. Martin 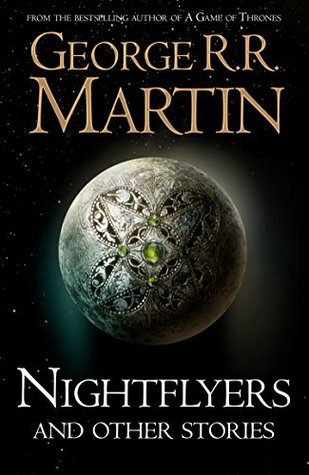 Dragons have always been cool, Video games have always been cool, real ale has always been cool. (Union) Rugby has always been cool, Science Fiction has always been cool, and Fantasy has always been cool. Football has always been shit, same as radio 4 depressing plays that the controller seems to think everyone has been to Cambridge/Oxford and therefore they like this sort of thing as it’s so highbrow. Kill a mockingbird yada yada, the Royal Shakespeare Taliban society again shit. Give me dragon slaying and space ship battles any day of the week. There's very little in life that can't be improved by adding dragons. Anyway, since when was a game of thrones considered to be fantasy? To me, it is fantasy with the guts ripped out of it. Take away the undead and the dragons, and you would see no difference to the overall story. It is a medieval soap drama with fantasy elements tacked on. Fair enough, Martins wants to move the genre on - he wants to go beyond epic sagas and doomed heroes, and the romance that underpins all fantasy, but what has he replaced it with? Sex and misogyny. And death...meaningless death...If you constantly kill off your characters left right and centre as it also happens in "Nightflyers", you're admitting a failure to move their development on. After all, it's the easiest thing in the world to kill a character and start again with somebody else, it's a lot harder to have him face the consequences of his or her actions. That takes a skilled author. Fantasy used to be about something. Even Conan had more intellectual heft than the present generation of so called 'fantasy' fiction. Granted, it was a thing of mostly ugly meanings if you looked at it hard, but it least it was carving out a place to stand on and defend. Instead of a genera where the magic was used to place a light on man's imagination and philosophy, it's become a canvas of sound and fury signifying nothing. 90% of the fantasy on the shelf these days is indistinguishable. "Nightflyers" and some of the stories in this volume suffer from this same malady as well. There is more complex fantasy around than Martin, but it tends to not be as commercial. Steven Erikson's Malazan Book of the Fallen is certainly more complicated and dealing with a much vaster set of themes (he even has a Conan-like character who actually channels Howard's philosophical viewpoint instead of just having muscles and a sword). Scott Bakker's "Prince of Nothing" series deals with philosophy, existentialism and nihilism. Matt Stover's "Acts of Caine" series might just melt your brain. That's not to say they are all better than Martin, and none touch Martin's gift for varied characterisation, but the genre is in a much healthier state now because of the authors that Martin helped get off the ground and get on the shelf by simply re-popularising the genre. Elizabeth Bear's excellent "Eternal Sky Trilogy" can be read as a subtle rebuke on Martin's overly-simplistic take on the Mongols with the Dothraki, for example.

Kick that fat man, kick him HARD! and if he falls, I'm stomping on his fingers.

I'd like to say that the popularity of the GoT show has drawn in more people to the fantasy book world (in general, not to GoT's world) but I can't point to anything to actually back up that desire. In fact, I've seen more people say they won't bother finishing the books, if Martin ever finishes them, since they are getting an ending with the tv show. In that way I think Martin has done a great disservice to the genre overall. Now, more than ever, authors are writing so as to be easily translated to the cable circuit and make the big, quick bucks. I don't like that trend at all.

I have one answer to Martin: Steven Erikson's 'Malazan Book of the Fallen' series; 10 huge books written within 12 years of the first being published. The writing surpasses Game of Thrones and has just as many memorable characters. It is slightly more high fantasy compared to GoT, but features plenty of dark and sinister twists! Also George RR will finish the series eventually, the last book will take what? 7 or 8 years...at this current rate so looking at wrapping it up around 2025...great! Martin does small plot arcs well but the bigger plot doesn't seem to move forward an inch. Rothfuss is the same. I gave up on Martin for good.

The same happens with KKC by Rothfuss. KKC does not seem like it's trying to be some dramatic epic fantasy story - note for instance the way we're teased with the glossed-over mention of the pirates incident, and how we then get pages and pages of wandering round tracking in the woods, complete with shaggy dog story, before anything happens.