Quantum Ontology: "What is Real - The Unfinished Quest for the Meaning of Quantum Physics" by Adam Becker 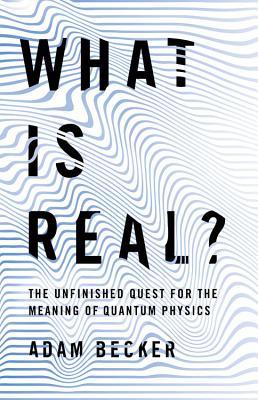 The diversity of possible comments on this book reflects ironically the Everett paradigm of quantum ontology. There are as many views of reality as there are observers. Thankfully in all instances, given the depth of some of the possible interpretations, the interaction of the observer state wave and that of the rest of the universe is extremely asymmetrical - the universe has a great effect on the observer but the latter's effect on the universe is mercifully, infinitesimally small. There is no doubt that the philosophical implications of the developments in modern scientific thinking are in lagging mode. This is because of the extreme complexities of the formalisms created to describe the reality as seen by human observers with a certain evolved sense of perception. The modern philosopher has to tread wearily through the theory before emerging tired and almost at wit's end to be in a position to even expound a valid opinion, least of all an emerging new philosophy, on the ontological basis of the quantum world. This is the first time I’ve read a book on Quantum Mechanics wherein three of the major outlier physicists appear: David Bohm, Hugh Everett III, and John Stewart Bell.

I'm always so frustrated by people who are absolutely sure of themselves, although I wouldn't doubt that I do the same kind of thing more often than I'd like. My suspicion is that people can't help but make probability judgments based only on the information available to them at a given time. Many, especially those in the scientific community, are quick to dismiss certain possible viewpoints because they consider them to have an extraordinarily low probability, therefore requiring "extraordinary" evidence to be explored at all. Even though I consider myself a "skeptic" in many ways, I've always doubted this kind of thinking, which I hear all the time from other skeptics. I'm not sure how to put it into words, but maybe it's the word "extraordinary" that I object to in the first place. Wouldn't many modern scientific "facts" and technologies, for example, be considered "extraordinary" by those in the past, even the recent past in some cases? This exclusionary model of (scientific?) thinking seems fundamentally flawed to me, yet on the other hand, I feel I completely understand why it happens. I believe it's simply a practical matter of human limitations on focus and scope. Ought we to not focus on those that have a higher "probability" of being provable and workable? We seemed to have arrived at some sort of logical paradox here. This seemed the attitude that Bohr and his accolades had when confronted with ideas (by Bohm, Everett and Bell) non-aligned with their vision of what was/is real.

Bottom-line: the Alain Aspect experiment leaves us with ONLY a dual choice in terms of interpreting reality: either (1) a hidden variable interpretation of quantum mechanics (as opposed to a wave-function collapse approach, or whatever) is looking less and less plausible, unless we are really happy to reject special relativity of course, or, (2) reality is non-local in the sense that instantaneous action at a distance is possible.

I'm not sure I agree with either; unfortunately both the theory and the experiments force me to choose one or the other. I don't think Kant, or anyone else, anticipated this. Bloody hell! In quantum mechanics, the results of experiments are probabilistic. But no one really knows how or why. By that I mean, are their properties as we measure them "real" or are we really measuring some abstraction of an underlying reality? It would take far too long to go into that here, but there are proponents on either side of the debate - and even within those sides, there's very different approaches. One'd probably find most people would say (for various reasons) that reality is fundamentally probabilistic (there is no underlying reality - no hidden variables), but it's not actually as pinned down as its proponents claim. Currently the most common idea is that the world is fundamentally probabilistic, but one obviously wouldn't' agree with that as a hard determinist. I think an idea I keep banging on about - not because I think it is necessarily right, but because I can't argue its ability to circumvent Bell's Theorem - is super-determinism. So, I don't think complexity can turn a hard deterministic universe into one that appears probabilistic, at least not at the fundamental level. But give me a few days and I'll probably change my mind on that. The thing with hard determinism and free will is that I don't think the two are compatible. I'm going to do what I'm going to do, irrelevant of any independent influence from "me". It's a nonsensical statement, even. That doesn't mean I don't make rational decisions, but what I'm going to do is already decided. On the other hand, if there is a "me" that can have some arbitrary influence on my decision making - how is that any more a case of free will? What instigates that spark of independence, other than some random action I have no control over? Even with an understanding of complexity, I still think it all boils down to those arguments of principles. I think. Basically, the question of free will does both my balls in…

A ham sandwich is better than understanding what is reality! How do we know that?

1. NOTHING is better than understanding what is reality -- AND
2. A ham sandwich is BETTER than NOTHING!

Sir, you and your ham sandwich are now banned from this fine establishment for distorting word logic so badly.

Please leave by the servants entrance, you plebe!

Plebe? Moi? I consorted with a Portuguese King!!!

This one appears likely to be above my intellectual pay grade. But Ill take a shot at it. Indue time....