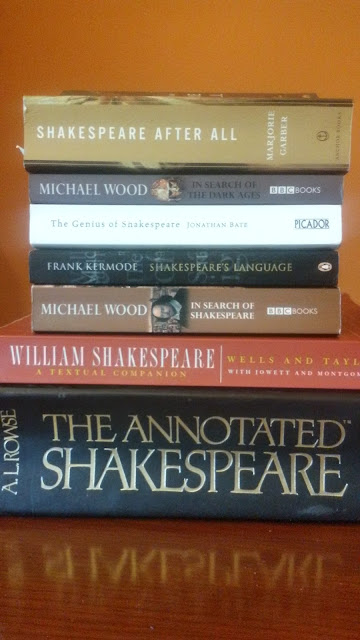 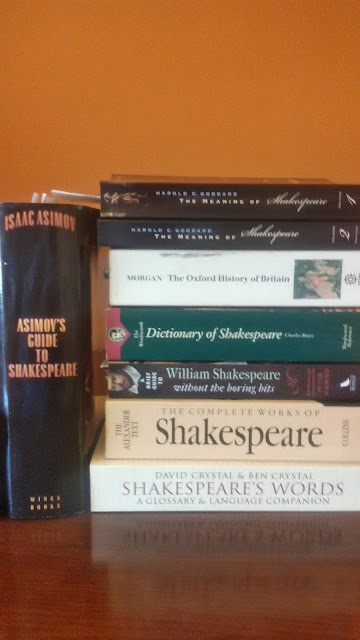 I’ve been asked quite a lot on how I read Shakespeare and what my fundamental library is. Here goes!

When reading Shakespeare I’m always looking for a way to experience what Virginia Woolf said she felt when reading his work. After using my modus operandi (14) I think I can now share and understand some of her exhilaration:

‘I read Shakespeare directly I have finished writing. When my mind is agape and red-hot. Then it is astonishing. I never yet knew how amazing his stretch and speed and word coining power is, until I felt it utterly outpace and outrace my own, seeming to start equal and then I see him draw ahead and do things I could not in my wildest tumult and utmost press of mind imagine. Even the less known plays are written at a speed that is quicker than anybody else's quickest; and the words drop so fast one can't pick them up. Look at this. "Upon a gather'd lily almost wither'd." (That is a pure accident. I happened to light on it.) Evidently the pliancy of his mind was so complete that he could furbish out any train of thought; and relaxing, let fall a shower of such unregarded flowers. Why then should anyone else attempt to write? This is not "writing" at all. Indeed, I could say that Shakespeare surpasses literature altogether, if I knew what I meant.’ 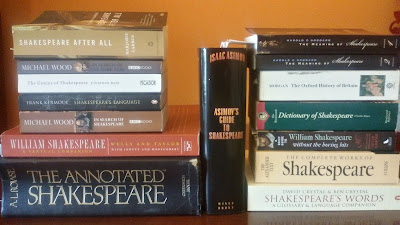 A few stray thoughts coming directly from my experience of reading the entire canon (38 plays + poems + sonnets, counting “The Two Noble Kinsman” while leaving out, for the time being, “Edward III”):

o   Read it in my A. L. Rowse, always accompanied by some Renaissance Music;

o   Read the play’s context in:

§  "William Shakespeare - A Textual Companion" by Stanley Wells, Gary Taylor;
§  "The Meaning of Shakespeare" by Harold C. Goddard (2 volumes);
§  “Shakespeare After All” by Marjorie Garber;
§  "Asimov's Guide to Shakespeare” by Isaac Asimov.

o   Watch it at home, cinema by any means available (DVD, Live Streaming, whatever);

o   Re-read the play in my A. L. Rowse to set the most important parts in my mind;

o   Select the excerpt/speech to learn by heart. Work on it in loop mode by using any means available until I’m totally satisfied (audio, developing mobile apps, etc):

The canon (see the following list which shows where I'm at currently, in terms of reading my Shakespeare)

§  All’s Well That Ends Well
§  As You Like It
§  The Comedy of Errors
§  Cymbeline
§  Love’s Labour’s Lost
§  Measure for Measure
§  The Merchant of Venice
§  The Merry Wives of Windsor
§  A Midsummer Night’s Dream
§  Much Ado about Nothing
§  Pericles, Prince of Tyre
§  The Taming of the Shrew
§  The Tempest
§  Twelfth Night, or What You Will
§  Two Gentlemen of Verona
§  The Winter’s Tale

·         If you want to be an exceptionally highly informed Shakespearean, I’ll tell you what I’m using  to achieve my goal book-wise (see pictures on this post). My understanding and appreciation of Shakespeare has grown immeasurably over the years by reading the great critics. Here is a list of the books and articles that I have found indispensable in my study of Shakespeare: