Catch Tapeworms: "The Woman in White" by Wilkie Collins 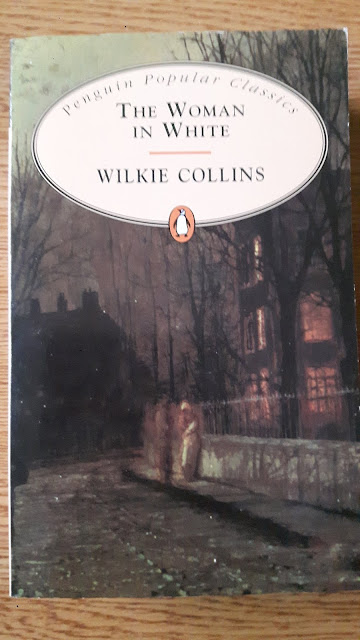 Beauty is completely subjective, and in Victorian times when this novel was written, the ideal of beauty was extremely different to what we would consider attractive now. Blond, blue eyed, curly hair and very pale was considered lovely. Women went to incredible lengths to achieve the paleness - even deliberately trying to catch consumption or tapeworms as that would help achieve the extreme paleness, weakness and general lying on the sofa because you are too pathetic to do anything else look. This is not a general look that is found attractive nowadays. Then, just simply having dark hair / eyes was enough to be considered 'ugly'. And then, Marion’s sheer physical energy and liveliness would have been found unappealing and a bit disgusting (I seem to remember from the book that she favoured 'natural dress', eschewing all the corseting necessary to achieve the Victorian shape), whereas today that is much more in line with what we find attractive.

In my opinion, Rosanna's interest is twofold: on the one side her character provides the melodramatic ingredient essential to any typical sensation novel, which is the genre that constituted Collins's main audience; on the other, the secrecy of her behaviour allows The Moonstone to linger for a couple of hundred pages more than it normally would on a modern narrative. Besides a myriad of details concerning the full gallery of personages in the novel, The Moonstone's inordinate (for a thriller) page-count relies on two main facts:

a) Rachel's refusal to recount the fateful night's chain of events;
b) Rosana's intriguing responses and sudden disappearance.

Without Rosanna Spearman The Moonstone would be a much shorter novel; but it's all due to Collins's talent that he could make so much with so little. Rosanna Spearman is indeed a very interestig character. Her real origins are covered in mystery but Collins drops some hints as to her possible genteel upbringing despite her former career as a thief and sojourn in the reformatory school. One of the other characters (I forget whom) notices her demeanour as that of a lady's, and then there's the famous letter. That someone with her bas-fonds criminal record writes so well can only mean she had a fairly good education. On the other hand, a letter as long as hers functions as a device for the author to enrich a whole installment of the serial while keeping the readers' curiosity in check. She can't confide in anyone and people don't really know what she's up to. She's also given quite a lot of license, even understanding, allowing her to be on her own. She is intriguing though. Surprised no one's been along to write her back story in same way as some of the Bronte's characters have had their stories told by later writers....

Collins's social awareness is still at its most embrionary level in “The Moonstone”, at least in what concerns Rosanna Spearman. We know almost nothing about her, and I believe that was the author's express intention, so as to spread a cloud of mystery over the conditions of her birth and upbringing; the reader can only speculate about Rosanna's identity. It's easy to feel a certain empathy towards the character because of the misery she appears to exude, but let's not forget she seems well treated in the Verinder household, benefits from Betteredge's leniency and her mistress's protection. The fact that she's not popular among the rest of the staff has nothing to do with her origins or situation in life. To be honest there's not much with which to weave a social case out of her; unhappiness and unrequited love are not themes limited to class discrepancies and I really feel Collins's purpose was to make a sentimental point not a social one.
Publicada por Manuel Antão à(s) 11:24 da tarde