Stat rosa pristina nomine: "The Name of the Rose" by Umberto Eco 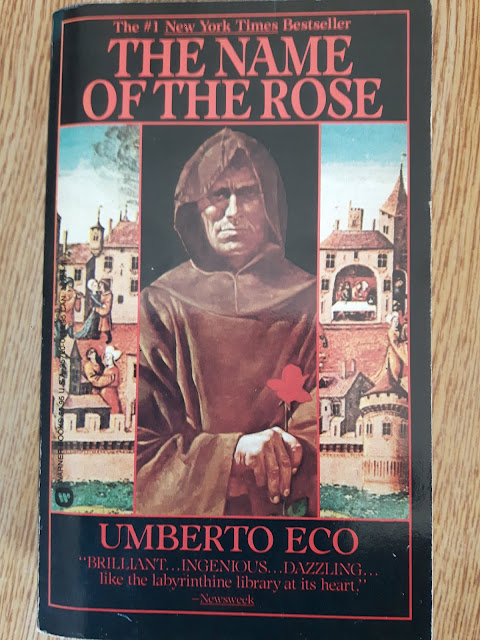 
In "The Name of the Rose" by Umberto Eco

As a novelist Eco blends the style of Arthur Conan Doyle with that of Cervantes in a most intellectually entertaining way but with surprising heart, also. It makes me keen to explore the labyrinth of his philosophy, which seems to exist in a realm of its own immune from the tedium and drudgery of most contemporary attempts at philosophy. Do you remember pictures in which you can see a nice girls or an old woman depending on the perspective you are using: What I like of Umberto Eco's books is the indeterminate aspects of described situations which often are a surprise for readers. You can never predict how the story will develop and this is true for his first "The Name of the Rose" and his last "Numero Zero" book. “The Name of the Rose” contains a Latin sentence: Stat rosa pristina nomine: Does this mean that the rose existed before the name was given or that before the name a rose was present? Dense in the most wonderful way but, with Eco being what he was, you don't feel it is at all pretentious; I prefer savouring and pondering some of his sentences for minutes on end before moving on to the next. It's pretty clear that's what he did when writing it. The film was entertaining as a murder mystery but, precisely because of that, probably diverted most viewers away from what the ex-Catholic Eco was actually saying.

Umberto Eco invented the medieval mystery genre; and knew that 'modern' people have always been around; and that there were no 'medieval' or 'other' ones. He was a medieval scholar as well as a  semiologist who I saw speak, on the subject of names for colours and any cultural difference there might be in this. In fact he spoke about translation and used this, and the translations of some of his works, as an example of what might be lost or not in translation from one cultural situation to another.

The book will last also because of its sense of a common humanity and an understanding of the petty jealousies and shortcomings of academic, sorry monastic life. Perhaps it's a sort of displaced campus novel, like David Lodge or Malcolm Bradbury. It also shows how academic studies can have a popular effect; and “The Name of a Rose” film, not like the book really, also contains his sense that it is tragedy that knowledge can lost in its transmission but also comedy in the way that through scholarly inquiry, and also effort and luck, much can be regained. 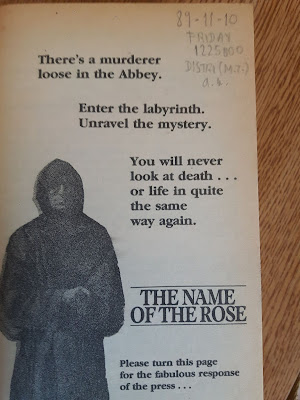 There is so much that can be gained when we look at 'reality' and received 'truth' in a new or fresh way. This is an avant-garde element of his thinking which was not of the left or radical like that but very liberal in the sense of libertarian. From a sceptical and erudite medievalist and thinker came a great and popular work that is Italian in its fable-like elements but also European. His leading character in the "Name of the Rose" is also English and he was an Anglophile.

Coming back to the last sentence is "Stat Rosa pristina nomine, nomina nuda tenemus" (The first sentence of the actual narrative is as banal as it gets: "Era una bella mattina di fine Novembre." The first sentence of the Prologue is "I principio era il Verbo e il Verbo era presso Dio", i.e., identical with the opening of St. John's gospel!) It is by now well known that that final sentence is a quote from De contemptu mundi by Bernard of Cluny/Morlaix/Morlay. Of course the rose exists before the name is given, but the sentence more or less explicitly states that names remain after the referents have ceased to exist. It is of course open to further interpretation.

This great populariser of philosophical thought was always in search of a truth behind the appearance of things, just like his detective protagonist William Baskerville. This idea, his writing affirms, will last.

NB: One of my favourite statements by Eco (roughly formulated from memory) is that when critics objected that certain passages in "The Name of the Rose" were completely anachronistic, i.e., out of keeping with medieval sensibilities and attitudes, in almost each case the passages they cited were ones he had translated word for word from authentic medieval sources. Unlike the critics, who only knew the popular, simplistic view of the middle ages, Eco knew all the nooks and crannies of medieval culture.
Publicada por Manuel Antão à(s) 1:03 da manhã Sem comentários: