The Revelation of the Identical:"Foucault's Pendulum" by Umberto Eco 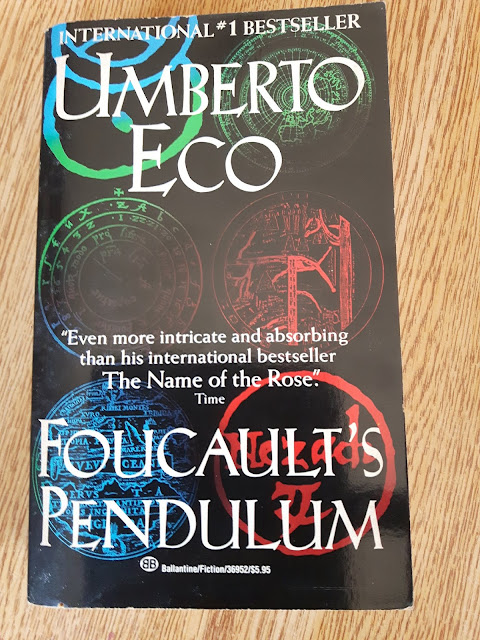 In "Foucault's Pendulum" by Umberto Eco

I've always been a keen follower of Prof. Eco's books, both literary and academic. If there's one question I would like to ask him is this:

Anyone who hasn't read Foucault's Pendulum - please buy it today! I think that while the first chapter seems almost deliberately intended to put off the casual reader, once you get through that you find an incredibly absorbing plot, a totally immersive atmosphere, incredible amounts of research dressed in swathes of mystery, and above all some of the most fully realised characters I've ever seen. It also has some quite unbelievably good prose even in translation - the segment of book-within-a-book set in Prague (the bit with the golem, etc.) is astounding. And the ending is superb. Like much of his work (particularly the almost equally good “Baudolino”) it revolves around the conflict between truth and fiction, and the way Foucault addresses this is brilliant. Here's a man that's studied for decades, passing on choice concepts in story form over relatively few pages. It's not like trying to dive into Derrida or Heidegger! 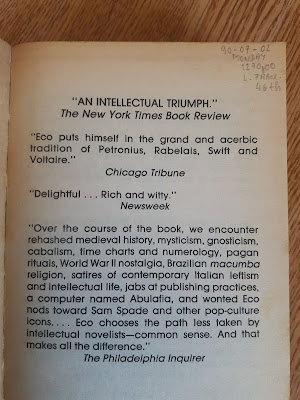 Bottom-line: If I can give a piece of advice, anyone whjo reads this should concentrate on being introduced to the likes of the Count of Saint-Germain rather than obsessing over what "constopulosiously" might mean... Be grateful of the inclusion of Prester John in “Baudolino”, he didn't exist - but he sort of did... so you can set to inferring why it is we create such figures in our minds and apply that to other beliefs and interests (deities, physics, celebrities, modern art...). This is why I maintained his books are edifying rather than obscure. However, human lies and linguistic lies are of a different kind of complexity. The possibility of telling lies for their own sake with no other motive and the ability to tell lies to ourselves- and believe them- are what makes the difference between language and philosophy and a simple behavioural code. Indeed, perhaps language and philosophy are only possible because we can say things we know are not true and as a result of that imagine things that may or may not be true. Indeed - I have been through it 7 or 8 times. It's simply fascinating, alternately hilarious, erudite, and intensely moving. The 'long stretches' are only 'opaque' for those too dense to understand them, and these diversions throughout, are among the book's many highlights.
Publicada por Manuel Antão à(s) 3:23 da manhã Sem comentários: 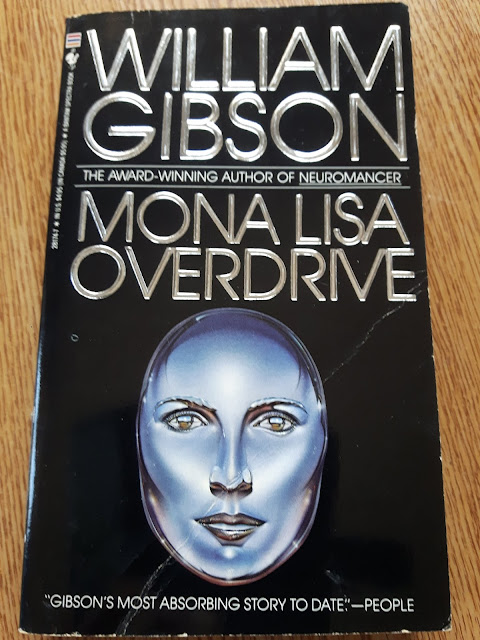 Is there a Monalisa Overdrive future in the works? That's not to say that there aren't plenty of SF predicted futures for the world that involve a sort of Utopian society where experiences are increasingly shared and cooperative than individually ring-fenced and private, but it's very easy to discredit them on the grounds of communist and socialist critique and all the heavy baggage that comes along with that. The other biggest practical stumbling block are all those who just can't help but get ahead of themselves - or perhaps panic at what they see as the emergent imminent apocalyptic Gibsonesque state and use this as a justification for taking extreme attitudes towards people who don't agree with them, but when we do this, it's just an expression of weakness and lack of confidence in our own ideas. A tacit admission that the development process - whatever that might be - just isn't ready yet. Not even close. That doesn't mean such a process doesn't exist and can't be pursued, just that it'll be a lot more involved and require a lot more preparatory steps and hurdles overcome than people would hope it might. I mean, granted I’m writing in wild generalities, but sometimes you have to do to say anything meaningful at all, when the subject matter in question (i.e., “Monalisa Overdrive” that is) is broad enough and when you're not playing to people's pre-existing biases and suppositions.

It's a dangerous thing to see the world as moving on a dark an inevitable path and it concerns me to see that sort of thinking gaining traction in the mainstream. To his credit, Gibson's work is likely in the vein of Orwell's “1984”, not as something he would hope to see but of a future we should hope to avoid, and outlining honestly why he sees the world as heading in that direction as a dire warning to help us improve. I'm just fumbling around in some vain attempts to provide a little of the other side to Gibson’s story.

Since the sheer volume of information and understanding available in the world is so vast, more than any individual could ever know, you learn to identify what's important to know, and what isn't. You learn to extrapolate and familiarise yourself with the important concepts, and this leads to a very solid view of how you think things are, and you apply that view reflexively to every different piece of information or alternative perspective you encounter, modifying and updating where necessary. So when you encounter someone out there with conflicting views, like Gibson, someone with dark, dystopian views that counter everything your own views are about, well that provokes a reaction and that's why I feel 'qualified' to write an alternative perspective as a counterpoint. Like an hysterical fanboy or fangirl, you could take this as some deeply unreasonable act of disrespect to the genius of the author - and I'm sure he has a genius that goes beyond my understanding, but that doesn't mean I can't reasonably disagree, and fundamentally so, with his outlook. If Gibson thinks there will be an apocalypse in the next 80 years where 80% of the world is wiped out and he has a solid reputation as a visionary, a modern day seer who can model with some accuracy the way the world is headed based on emergent technologies, then as far as I'm concerned he is throwing down the gauntlet on a set of very serious matters, and from a position of some significant authority and respect. 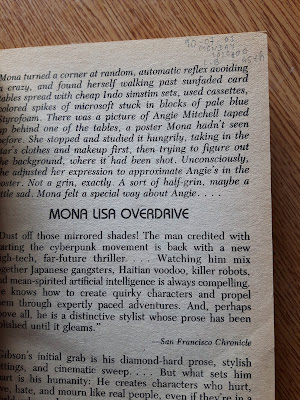 That's reason enough, I think, to justify highlighting what might be seen as elements of an alternative to that perspective. When people (and Gibson is by no means alone in doing this) are predicting dark times ahead for humanity, it certainly can't hurt to explore the possibilities of diverting course, and, at best, who knows, it might actually help to try!

I've made an opening gambit by this review on which I would welcome the opportunity to deliver more specific details. If you feel anything I said was woolly or unclear, call me out on that.