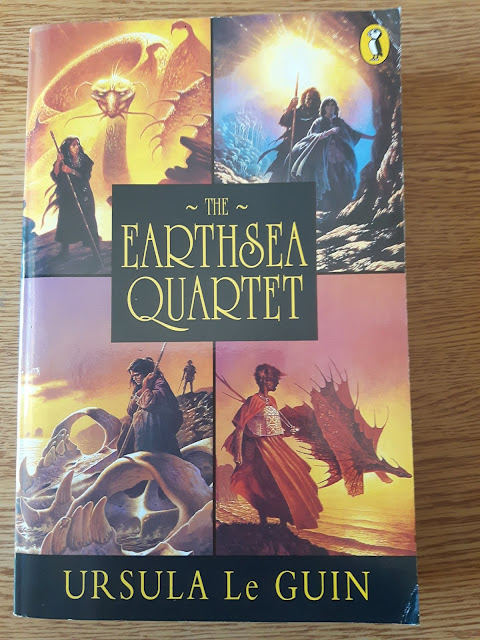 (My own English copy)

Who now has the stature and respect to call out poseurs like Atwood and Ishiguru? Who is there who can be relied on to correct the lazy and meretricious? She led lead by example, not just in speeches or reviews. The world is poorer for this but it's going to be decades before we really see how much.

Ursula k. Le Guin is one of my lifelong favourite authors who I return to often. I first read “A Wizard of Earthsea” when I was 8, in between the Hobbit at 7 and The Lord of the Rings at 9 (precocious child…), followed by the rest of the trilogy, and then later books like “The Left Hand of Darkness”, “The Lathe of Heaven”, “The Dispossessed” and on and on.

What a writer - in the six Earthsea books alone, she said more, and with more purpose and clarity, than any other fantasy author, except Tolkien, at least in my opinion. And she wrote extraordinary SF too. Speaking of the devil, as someone who has a pretty encyclopedic knowledge of Tolkien, the greatest tribute I can pay Le Guin is this: every fantasy epic I have ever read has been at best a pale copy of Middle-Earth, because he did such a thorough job of creation over many years. Every epic except one that is - Earthsea. The Archipelago is not Middle-Earth, her dragons are not like Tolkien's dragons, and Ged is not Gandalf, although he is every bit as wise and kind. That is a very great writing achievement in itself. And I was aware of the significance of Ged, Ogion, Vetch, etc., not being white from my very first reading of the books. And that was in 80s. Remember, early on in Earthsea when Ged sneaks a look in Ogion's book, and the shadow begins to appear by the door? A metaphor (all the more powerful for being a genuinely scary piece of writing) for what can happen when we crave power and use knowledge without awareness of the potential consequences, and with no thought for upsetting the balance of the world. Of course it's a thread that runs right the way through the series. The story of how Ged continuously grapples with this issue makes him, for me, one of the great figures in literature. I think, partly because I am a Computer Science graduate, I have always particularly appreciated the fact that magic in Earthsea has rules and structure, whereas in Tolkien it doesn't seem to - although, to be fair, he did address that point in some detail in one of his letters: 'I am afraid I have not been at all consistent in my use of the word "magic"...'

I have also always rather hoped that, should there turn out after all, against all the odds, to be a paradisiac afterlife of some sort, that it might contain elements of Rivendell, Valinor and the Immanent Grove of Roke. Of course, I'm well aware that this is not a notion that someone who is thoroughly familiar with the laws of Thermodynamics (especially the Second Law) should rationally entertain!

I feel like "magic" is not so important in Tolkien, in a way. His books are more a combination of great adventure, exploration of moral principles such as loyalty and sacrifice, and incredibly complete world-building. Le Guin's books probably explore more complex ideas, which doesn't necessarily make them better, just different. I am still absorbing the extension and in some cases revision to Earthsea in the three books she wrote long after the trilogy. But what I like about the "magic" in Earthsea is the deep exploration of the power of language and also the reminders that every action has a consequence. 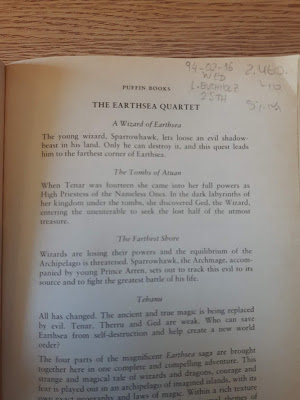 To consider the Earthsea trilogy as “juvenile” in any pejorative sense would be grotesquely off the mark. They are technically superb examples of the Bildungsroman genre (of which Hamlet and Jungen Werther also deserve honourable mention). They contain passages of Dickensian evocation of sight, sound and smell; are compassionate, urgent and questioning; and they tell a damn good story of quests, chases, shadows, and authentically hot-smelling dragons, which by and large avoid descending into tropes of nobility and Tolkeinesque conservatism/ monarchism, and in the latter 2 installments, actively reposition that discourse. To put my neck out, I’d say there is currently no equivalent writing (i.e., writing of equal intrinsic value) - in any genre. I find it so endlessly re-readable partially because I see different things in it as I move through my own life and as Ged moves through his; “Wizard” being about the potential for arrogance and pride to (literally) cast strange shadows and the need to confront rather than externalise fear, “the farthest shore” being an acute meditation on the fear of death. There’s a lot of wisdom in it - the passage about “what is the use of you, or I, or Gont Mountain” always struck me as something very profound to be in what was ostensibly a children’s book.

Now that I've heard she's gone, I wish that I had written to tell her how much her Earthsea trilogy affected me as a child, the first trilogy (as it was then) of fantasy novels with emotional intelligence, and language that is the closest prose will get to poetry. I rated those works of fiction as the greatest in the fantasy genre ever written, surpassing even Tolkien because her perfectly realised world told a story with a profundity which is rare, and which he perhaps could never aspire to match. The thoughts in them occupy me even today, as I contemplate the inevitability of my own death, the wall of stones "no higher than a man's knee" which we must all cross, and where she has now gone before.

And now, since she abolished the wall of stones in the last book of Earthsea, I hope she is dancing with her dragons on the other wind. RIP.