Sonnet 42: "The Hitchhiker's Guide to the Galaxy" by Douglas Adams 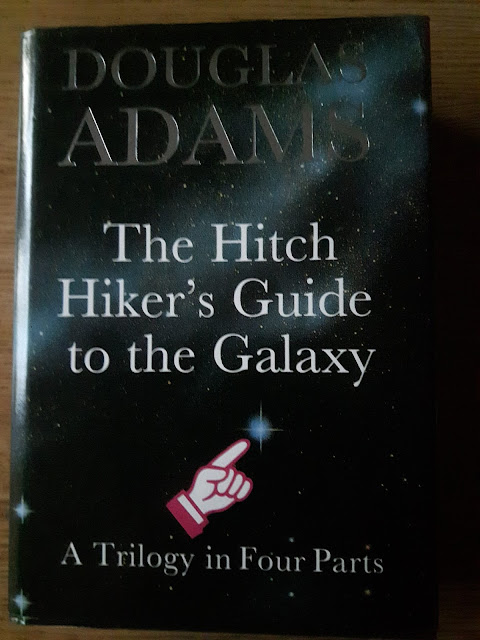 The way I (probably mistakenly) see it, the answer 42 represents a view of cheery perfection. It's almost as though it is trying to be as divisible as possible simply to be helpful. Even its name is annoyingly perky. It is the number which represents what the established order (notably religion) has told us represents the universe. It is the number of order, sense and reason. Neither 6 nor 9 nor 54 are particularly welcoming numbers.  Douglas Adams seems to like this view of the world. Just like Sirius Cybernetics, we're sold the idea of something being perfect and flawless whereas we all know (even if we are reluctant to truly accept it) that the reality does not match it.

I also wrote the “perfect sonnet”:

That thou hast her, it is not all my grief,
And yet it may be said I loved her dearly;
That she hath thee, is of my wailing chief,
A loss in love that touches me more nearly.
Loving offenders, thus I will excuse ye:
Thou dost love her, because thou knowst I love her;
And for my sake even so doth she abuse me,
Suffering my friend for my sake to approve her.
If I lose thee, my loss is my love's gain,
And losing her, my friend hath found that loss;
Both find each other, and I lose both twain,
And both for my sake lay on me this cross:
But here's the joy; my friend and I are one;
Sweet flattery! Then she loves but me alone.

By MySelfie, the Flatulent Shakespeare 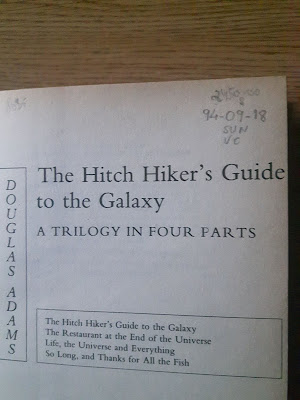 (Bought in 1994)
NB: At the risk of being jumped on and beaten up by everyone who hates such things being mentioned, there is another lovely coincidence here to do with the number 42, and that is that in cultures all over the world 42 is the number of Creation. The Jews believe 42 is the number of permutations of the letters of the name of God with which the Universe was brought into being and in China, both the Tao Te Ching and the I Ching discuss the creation of the Universe in their 42nd chapters. In ancient Egypt, 42 was the number linked to the Goddess Maat (Wisdom) who was the personification of the idea of balance and harmony the Egyptians thought upheld the Cosmos. I offer this up as a piece of anthropological information which makes a nice coincidence for Douglas Adams, whose books I have loved since a child, and not as something which suggests we should all bow to the Pope, become orthodox Jews or take up Taoism, in case anyone starts frothing at the mouth. I just thought it was fun that Adams, in thinking he had come up with a joke comment on the futility of trying to come up with an answer to the question of the meaning of the Universe landed upon the one number which traditionally has been all about the meaning of the Universe! I had always believed that Douglas Adams chose "42" since it was (but no longer is) the Hubble constant. If the number was below 42 then the universe ends in big crunch, greater than 42 we expand into infinite nothingness, but at 42 the universe will reach a state of equilibrium. However the number has been subject to revision and is steadily crawling closer to 43 which (imho) is the ultimate number ....

Dua, Odeen, and Tritt: "The Gods Themselves" by Isaac Asimov 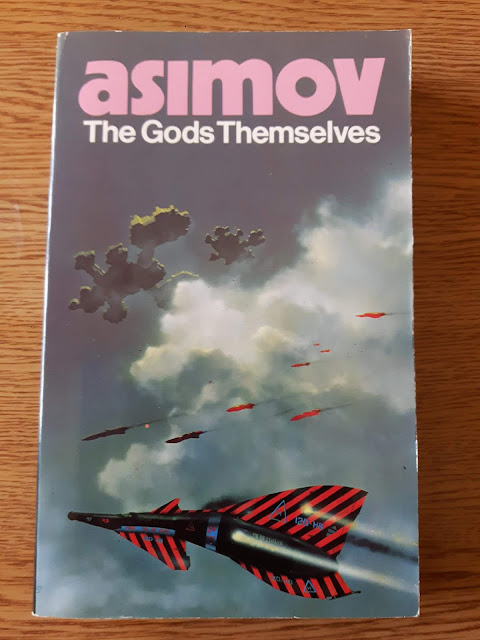 I admired it much more than I actually enjoyed it. Asimov's ideas are brilliant but his characters are somewhat bloodless and cardboard. Even when he tries to work against this it comes out all embarrassing. The third section on the moon is a pale imitation to Heinlein's 'Moon is a Harsh Mistress'. Given the timing on the publication that can't have been an accident.

As to the Big Three argument, it's silly to throw Heinlein out at this stage. He dominated the actual science fiction writing of the late 30's and early 40's. His juvenile works in the 50's were incredibly important gateway works. Much of the NASA personnel that launched the moonshots got into science because of them. Bradbury didn't write nearly as much science into his fiction. You may prefer him (I don't) but he really doesn't fit the category in the same way that Heinlein does.

Two thirds of it was pretty shoddily written - far too much exposition, and people behaving irrationally in order to move on the plot. The remaining third, though, is excellent - the section set in the parallel universe. Even then the work is now little more than a curiousity.

Incidentally, I would highly recommend Roger MacBride Allen's Caliban series. These three books (Caliban, Inferno and Utopia) are based on the spacer vs settler conflict set up by Asimov, and are listed as being co-written by Isaac. In them the author(s) rewrite the famous 3 laws of robotics, as well as telling a much better story than old Isaac ever did. 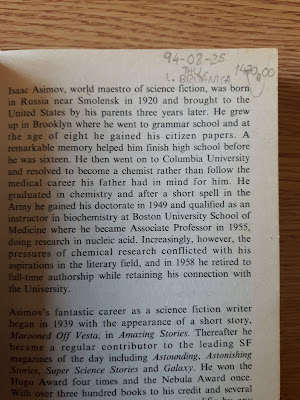 Asimov started my love of science fiction when I bought "The Martian Way" in a Brasilian-Portuguese translation as an 11 year old on a wet and boring holiday in Portugal in 80s. I'll always be grateful for what he led me to but I have to say that, like most of the other so called "golden age" authors, he was long on ideas and short on quality of prose. Still without him would we have had George Turner or Ian M. Banks?

"Nightfall" still remains for me the ultimate horror story. The prose is often dire but the yarns are great fun. For utter dire-ness of prose but a ripping and far-fetched yarn, you can't beat E.E. “Doc” Smith's Lensman series. I swear he used up the universe's entire stock of superlatives.

NB: I have been told Gene Wolfe is much better then Isaac Asimov by a friend of mine. The problem with Gene Wolfe's "Book of the New Sun" is that we've got to deal with Wolfe's obsession with his hero's massive sword and women with small, high breasts... Ah well. I must get round to write a review on it too.