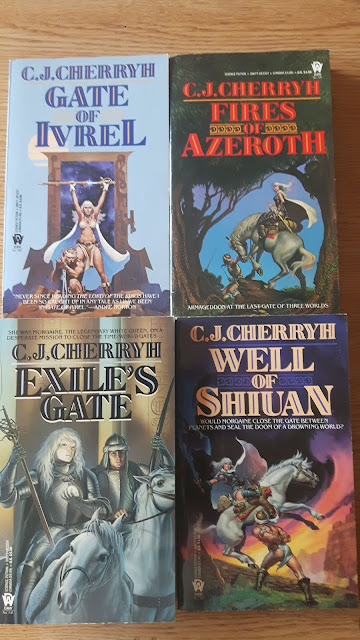 I agree, for example, that we'd probably align in terms of what was 'fantasy' and what was 'science fiction' based on the rather limited selection of books you find on the shelves at my local Bertrand Bookstore in Lisbon  (or Waterstones if you're in the UK; take your pick). Where my vision might differ from common opinion regarding SF, I think, is on how hard and fast the difference is in the wider genres. To take as one example C. J. Cherryh's 'Morgaine Saga'. It uses all of the tropes of 'fantasy' - a warrior protagonist with a 'magic' sword, pseudo 'medieval' societies to who she is a demon/goddess. But it could arguably equally be categorised as science fiction - the protagonist is the last remaining member of a technical team sent to close down a network of 'gates' (actually alien interstellar teleport devices), her sword's 'magic' comes from the captive singularity at the tip of its blade, her 'goddess' status derives from memories of her passed down through generations due to time dilation effects from the travel through the 'gates' of survivors of the societies she destroys through the gate closures.

A more interesting question, though, is why there are more women writers on the 'fantasy' shelf and more men on the 'science fiction' shelf in bookstores, and whether that is necessarily representative of the actual number of authors of each gender in the two genres. And that's the question this saga seeks to explore, I think. Is it because women in general don't (or can't) write good science fiction? Or is it because there is a built in propensity in the industry to categorise fantasy as the preserve of the female and science fiction as the preserve of the male? Off the top of my head I can think of a lot of SF female authors writing top-notch SF stuff: McHugh, Kowal, Pat Murphy, Pamela Sargent, Leigh Brackett, Pat Cadigan, etc. I don't presume to have a definitive answer (although the number of fine science fiction writers who happen to be women suggests it's not natural aptitude that's to blame). But it's certainly a legitimate question, isn't it?

Charles Stross' “Merchant Princes” series was initially branded as Fantasy for contractual reasons, though conceived and completed as SF. Even setting this aside, there is a huge amount of fluidity in authorship between the SF and Fantasy genres (especially recently it seems to me). Bear in mind that most pro writers do not simply write a book then try to sell it - they pitch it, they take the advice of agents, etc. Some writers in SF are certainly encouraged to shift to a Fantasy emphasis because of the genre's current saleability (especially in Dark or Urban fantasy), and it is not beyond the bounds of possibility that this could be (explicitly or tacitly) directed at women writers more than at men. (Note I'm not saying it is, but one's potential scoffiness at the suggestion is not adequately justified, I think.)