Universal Machine: "The Feeling of What Happens: Body and Emotion in the Making of Consciousness" by António R. Damásio 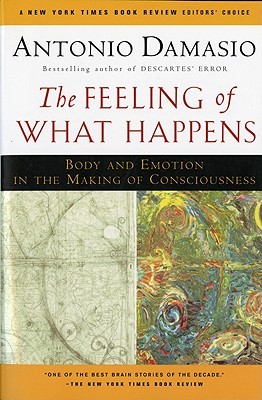 I don't agree that it is as big mystery as pointed out elsewhere in another review I’ve read...I think we do know a great deal about consciousness. The problem lays also in our willingness to explore altered states of consciousness. This must be included in any theory...Some examples of books dedicated to this subject of consciousness. I have been reading lately: “Complete works of Freud and Carl Jung”, “The Tibet Book Of The Dead”, “Tao Te Ching”, R. D. Laing’s “The Politics Of experience (Birds Of Paradise)”, “The Tao Of Physics” by Fritjof Capra, Works Of Richard Feynman, Works of Spinoza, “Altered States Of Consciousness” by Charles T. Tart, “The Conscious Mind” by David J. Chalmers, and Anthropological Studies on Shamanism and so on, indicate that the human animal has not progressed much physiologically over the past two or three thousand years. However we have progressed massively technologically...Plenty of food for thought in this area.

Panpsychism describes almost perfectly what has been my own thoughts about consciousness for a while now. I tend to think of consciousness as an all-pervading attribute of our Universe which only becomes apparent (emerges) in certain conditions such as when matter becomes sufficiently complex*, as is the case with ourselves and with other life forms that have evolved. Should an alien life form more complex than mankind exist somewhere in the Universe, then their consciousness - their sense of selfhood - might be even more apparent to them. In fact the difference compared to us might be akin to the difference between human consciousness and cat consciousness - something to ponder.) (*It's interesting to wonder if there might be other conditions necessary beyond complexity.).

For some reason, this makes me think of Alan Turing's concept of the Universal Machine. I imagine some (hypothetical) minimum amount of language, and a minimum amount interpretation (synthesis, re-statement, re-telling using that language) as the nexus of consciousness. Funny thing: our senses are only aware of what they have evolved to perceive: bats model sound waves the way we model light waves. But the end result, inside the brain is the same.

Thanks to Damásio for a very interesting round up of where we currently are in relation to the hard problem. Though it's no harder than the tricky dicky problem, does a cheater exist, though for some the answer appears pretty obvious, but to prove it is another matter.