Painting in Text: "The Gormenghast Trilogy" by Marvin Peake 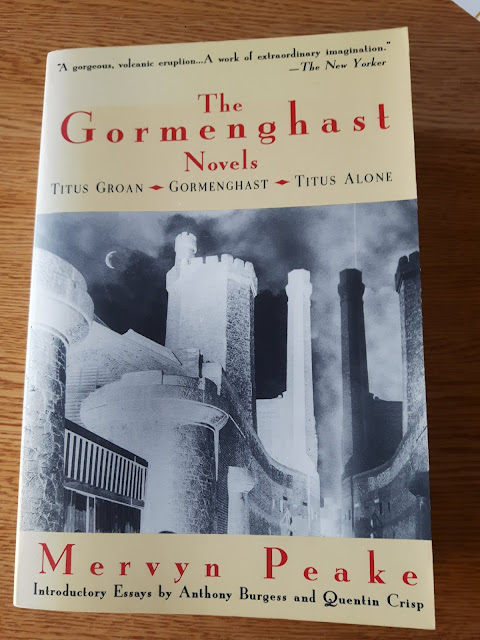 I consider it pointless to compare Tolkien and Peake; you might as well argue whether Raymond Chandler is better than Ivy Compton-Burnett. I would only point out, since I believe no one has so far, that in Gormenghast, unlike Middle Earth, Sex exists. I also think Peake fits into the Gothic tradition in literature – it is surprising that a book containing no magic or mythological creatures or supernatural events is so reflexively categorized as “fantasy”, but perhaps, without that classification, one would have to consider it “sui generis”. I agree too with the comment about Peake’s writing being pictorial; at times when reading Titus Groan or Gormenghast, it is like allowing ones eye to wander into a large detailed canvas by Bosch or Breughel, filled with grotesque and amusing details scattered throughout a fantastic landscape.

I discovered Gormenghast at age 14, picking up the books after reading a brief but tantalizing description in Lin Carter’s “Tolkien: A Look Behind the Lord of the Rings.” I was living in a big city built on and surrounded by 7 hills, with its share of eccentric characters, large public buildings and a street of decaying mansions signifying a departed importance and opulence, and many narrow lanes, supplemented by iron staircases, climbing up and down its slopes. For me Gormenghast was at first a strange and exotic place in which I gradually recognized so many parallels with my home city that, by the time I was into the second volume, I almost felt I was living simultaneously in both my familiar town and the increasingly familiar environs of Gormenghast. Sitting in a late spring study hall with warm mote filled sunlight streaming through the dusty windows, reading about Titus daydreaming adventures in a similar situation, I experienced almost an identity of reader and subject.

There's one obvious difference between the Lord of the Rings and Gormenghast, and that is that Tolkien's book contains fantasy in the sense of magic and the supernatural, and Peake's doesn't. So if people like "fantasy" as a genre, they're going to be disappointed in Gormenghast. The other difference is that Tolkien gives his readers a hard-earned victory, whereas the first volume of Peake's trilogy ends with evil triumphant, and the second includes the murder and defeat of good characters, and the suicide of another. Gormenghast as a world and characters is really quite unpleasant, so it's not surprising that it hasn't caught on to the same extent. A more pronounced difference is that Tolkien gives us hobbits as a device to enter the world of Middle Earth, figures who are just smaller versions of ourselves; Peake makes no concessions to his readers, and the figure you start out identifying with, Steerpike, the kitchen boy who escapes his caste to realise his potential, turns out to be an amoral murderer who is willing to use rape as a means to an end. Who is the hero in Titus Groan? 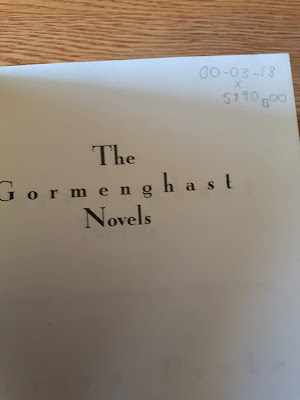 But the main difference has got largely to do with language - Tolkien went to great length to construct 'ancient' languages to give an extra level of authenticity to his vision of Middle Earth, but his actual language, the language his novels are written in, is distinctly workaday, filled with olde-english tweeness. When Moorcock wrote about "Epic Pooh" he was criticizing Tolkein's cozy world-view, but he could also have been describing Tolkien's language. Peake didn't try and create a language, but his actual language is so dense, pungent,and bizarre, so unexpected and "outré", that reading it feels like walking through a strange, alien swamp. That language, and the equally unsettling names he gives his characters, is what gives his vision its power.

The thing that makes it seductive and special is what works against it for many readers: it's a painting in text rather than a story. Sequential logical connections between one event in one place and another on a different place are secondary (at best) to a dream-like elision between set-pieces. It's not a trilogy because the third book, like the fourth, is what's left of Peake's notes for a set of images-in-words that accreted organically rather than having novelistic plotting. Nothing of any more consequence than anything else happens but it's all happening all the time. Anyone who enters this with expectations of an ordinary mundane 'resolution' is barking up the wrong tree. It's about the journey, not some destination that didn't interest Peake. It's not that kind of work.

Peake's books are perhaps the last glorious outburst of Gothic romance in English fiction. Freud and surrealism provide considerable impetus as well. In that respect Titus Groan is so different from Gormenghast as to make it a very difficult opening volume: it meanders, it glories in static tableaux, it immerses itself in ritual and gloom. By contrast, the second book is full of action and drama. The rivalry of Flay and Swelter in the first book is a slow dance of death, whereas that between the adolescent Titus and the upstart Steerpike is energised by their youthful vigour and imagination.

Worth mentioning (as my edition of Titus Alone points out) that Peake was a war artist who entered Belsen and was profoundly affected by what he saw. Titus Alone appears to reference some of this in the horrors of the factory. But it has to be read for what it is - a fragmentary work which the author was unable to bring to completion. Each made an honourable attempt to work through some of those experiences in their fiction, in their different ways. 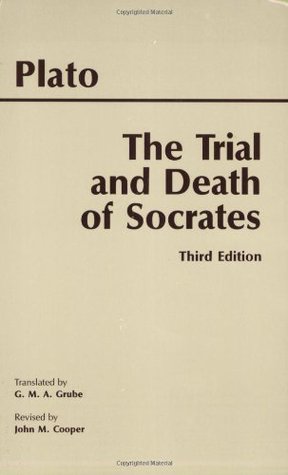 I'm not trying to do much more than suggest Plato isn't starting from a blank sheet but from huge trauma: the death of a way of life that produced his great teacher, Socrates, but at the same time, killed him. The jurors who vote to put Socrates to death, after listening to the speeches, are the citizens who voted to exterminate the Melians, and many other atrocities.

Plato shows us a Socrates who stands against the idea that persuasive speeches and a majority vote are sufficient to establish the justice of a cause: although we still use trial by jury in 2500 years since. In the dialogues he is not just discussing abstract subjects with abstract pupils, but debating with the players in the real, historical drama. The question I'm asking, I suppose, is - where does Plato think the flaws are in the world of Socrates, that eventually killed him? What's he trying to put right? I don't pretend this is easy to answer satisfactorily: not least because the characters in the dialogues who are so charming and admiring of Socrates are often the same people who screw everything up for their teacher down the line.

I think Hanson is pretty good on military history but like many military historians, sees military solutions to political conflicts everywhere he looks. He also seems to be growing increasingly partisan.

I just wish I were living and teaching in Thebes so that I often could take my coffee at the kafenion on Epaminondas Square, in the shadow of his statue. Thebans notoriously picked the wrong side – they usually elect a communist mayor when the rest of the country lurches to the right, and thus the roads never get properly repaired. Epaminondas' tactic of attacking the superpower by isolating its allies was very successful against Sparta, not least because there were so few Spartans and their strength really resided in keeping the allies under control. But I don't think Thebes really chose not to have an empire: I think the league was the limit of its power anyway.

Yes, they were crushed by Macedonia. Did Epaminondas unwittingly teach Phillip how, when he was a young hostage in Thebes? And did Epaminondas learn his tactics in turn from studying the Theban general Pagondas, who did something similar at the battle of Delium? Where Socrates stood in the front line...