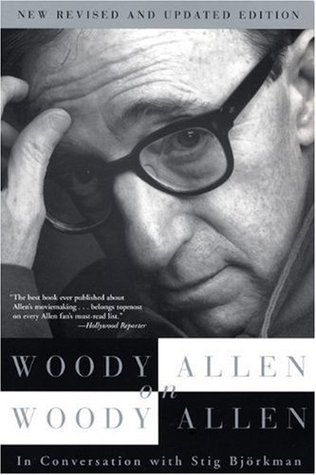 Haven't seen “Annie Hall” in years (I’m going to rectify it today), but I thought the best lines were when Allen's and Keaton's characters are asked by their analysts the same question, in split-screen:

Personally I'd also put “Sleeper” and “Play it Again Sam” in the same level as “Annie Hall”, both of which are also laugh out loud funny. But I don’t love Woody Allen’s films because they’re funny (and some of them like “Manhattan” are not that funny.)

What about “Manhattan”? For me “Manhattan” is simply a wonderful study of human frailties and how easy it is to fail to cherish the wonderful thing that's right in front of your nose. That Tracy is the only emotionally mature character provides the perfect foil for the others to play out their various untrustworthy schemes around. It's a pretty bleak study of deceit and weakness in many ways, but the brilliant dialogue, stunning filming and of course the music give a counterbalancing warmth and depth. Saw it yesterday on the big screen before writing this and thought it was simply breathtaking.

“Annie Hall” is starting to be strangely under-represented in Woody Allen lists nowadays (maybe Diane Keaton has a hand in this), despite being one of the most consistently laugh-out-loud funny film he wrote. It also showcased his brilliance at slapstick as a performer, something I think he under-used in later films. (I'm thinking especially of the rice eating and the accidental album flinging.)

Humour is where you find it. Mr. Allen can put into words and writing what others either do not experience or cannot express through situations or dialogue so that others can laugh silently or out loud or merely groan at the triteness (whose life is not trite at times?) or truth. Other kinds of humour are not being dismissed, but what you can admit is that a US-centric view of the world certainly needs the humour of guys like Allen to straighten things out the self-styled leaders of world everything a bit and the admiration of other possibly envious authors to honour the achievement of a writer, however eccentric or nutty he is. As a Portuguese who has been around, “Annie Hall” is full of humour if you understand the language well enough, I think that humour very often expresses the mentality seated in the souls and language of those using it. Here in Portugal, British slapstick (e.g., Mr. Bean) is greatly admired while the subtlety of UK wit is not usually understood because it loses in translation or there is no way of translating it.  In other words, laughter is universal, humour is not.

If you are waiting for the comedy to 'happen' to you from outside yourself, i.e., from the screen, then Allen is not for you. Another way of putting it would be that you are waiting for the comedy to be done to you. Instead, try recognising yourself, the people you know, and your experiences, in the clip. Allen's is a comedy that you 'recognise' as a reflection of your own experiences. There is comedy that presents a scenario that isn't recognisable as your own experience (and presents it as funny), and comedy that makes you reflect and see yourself (and hence see yourself in a new, humourous, light). Surely, on a gag by gag basis, comedy either causes you to find aspects of another's experience funny, or causes you to find aspects of own experience funny. I would certainly not want to claim that the crude distinction stands on a comedian by comedian basis because comedians freely move between the two sides of that distinction if we were to pull apart their material gag by gag. However, I would add the qualifier that an individual gag may have two or more funny points/aspects within the one gag where each funny point/aspect adheres to one side of the distinction. I always am intrigued by this social aspect of comedy, as distinct from the individual.

People who reject the idea of Allen being funny don't insult me (there’s not much that insults me). I just appreciate the different mechanisms or levels that comedy can operate on and I try to get a handle on as many as I can in this short life we have. Allen's comedy clearly operates on a different level than Monty Python, for example. His level isn't higher or better or anything like that, it's just different. The smug cool/nerdy type people like to associate with Allen is definitely a trait common to some fans where 'getting it' is some kind of badge of honour. Yet it is a disservice to suggest that that's the only possible market for his schtick.

If we're discounting his work based on his actions in his private life then we need to reexamine vast, vast swathes of mankind's entire creative output. From Caravaggio though to Dickens, Naipaul, Woolf, Rand, Mailer, Scott Card, Hamsun, Anne Perry, Golding, Ginsberg and Polanski and a whole raft of others. It's ok to judge the work on its own merit. Validation of Allen's films is not the same as validation of his private actions which I don’t care about at all (admittedly contemptible; incidentally, nobody knows the exact facts, although some of the commentators, judging by their comments on certain tabloids and TV appear to know Allen personally; judging someone on the strength of the seriousness of the accusation?! Pfff. Who isn’t liable to potentially become of a victim of that particular horror? By that rationale if I accuse someone of something horrible it should be held by everyone to be true until you can prove in an expensive court case that I am talking out of my hat? And until that happens you are not allowed to earn a living..?)