POMO: "The Midwife of Platonism Text and Subtext in Plato's Theaetetus" by David N. Sedley 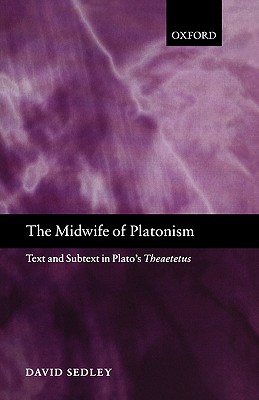 Yes, dinosaurs did exist before the name was created by Richard Owen; they were probably known as dragons before in pretty much all myths around the globe. But the dinosaurs themselves only existed in the imagination of people once they were discovered and named by paleontologists.

So yes, things do exist outside of our consciousness although they only exist to us once we were conscious of it.

Either way, your statement proves that whether truth exists outside of our consciousness, you can only grasp what you (or a trusted authority of paleontologists) are conscious of. The idea of dinosaurs didn't exist before it was discovered, although dragons were quite omnipresent in many mythologies around the globe...they are not quite the same but remember that the first dinosaurs reconstructed were not exactly accurate either as the facts were slightly misinterpreted ( due to their mythologically-loaded background probably as starting point ); because thankfully dinosaurs are not alive so we can only rationally speculate on how they looked like and how they lived from a few fossils.

Even though, we're still unable to tell which color they were; they might have been pink and purple like Barney, we wouldn't know... at best we can imagine they are green/brown like the other reptiles alive these days.

So I agree with you that language and what it is supposed to represent are two different things but we're not able to understand what is outside language therefore for this very simple reason, our conscious representation depends on language.

Dinosaurs certainly did exist before we discovered about them, but this fact was of no importance to anyone, since no-one knew about them. They became part of the consciousness when the word dinosaur was created, even if it relates to a creature that existed independently of language; it needed to be named in order to exist in our representational minds.

I guess there is a subtle distinction between what exists (existed) and what is represented by our consciousness; all sorts of stuff might exist that has not yet be discovered, represented or understood properly but since we have no word for it - it might as well not exist, it would be the same to us so arguably something exists (in our consciousness) once we find a meaningful word to label it. That said, yes things do exist outside language but they are meaningless and unconscious, a bit like how you would argue that Dasein is a sort of meaningless zombie... It's easy to argue that what exists outside our consciousness is therefore pretty much a zombie to... it's totally irrelevant; it does not even make the grade for a myth which at least is a product of language, has a meaning and exist in our consciousness.

But, I, you, other people and animals exist outside language and none of these beings are zombies. So, at best, material objects like stars and mountains are meaningless until they are perceived and described but that seems like a red herring in this debate. Secondly, consciousness does not require language and hence the claim about meaning (no language = no meaning) you are making seems false: pre-linguistic animals and very small children have no language but they are conscious and enjoy representing the world via representations that have non- conceptual contents (Elizabeth Spelke; Michael Tye).

Finally let me emphasize that the debate between me and the pomo crowd is between realism (Plato, modern science, philosophy) and anti-realism/constructivism (Heidegger, Derrida, Latour, Rorty, Kuhn, Putnam). The latter denies that truth is independent of language --in the sense I explained --and that view has been shown to be first of all badly motivated ( arguments for it are bad ) and secondly to be false / incoherent. You seem to have changed your mind now and shifted camps with these latest concessions of yours which is nice.