Own Rituals: “The 7 Habits of Highly Effective People” by Stephen R. Covey 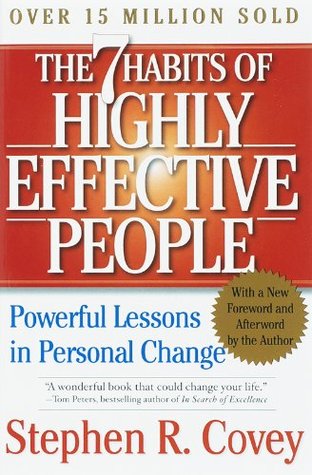 "Love is a verb. Love – the feeling – is the fruit of love the verb or our loving actions. So love her. Sacrifice. Listen to her. Empathize. Appreciate. Affirm her."

In “The 7 Habits of Highly Effective People” by Stephen R. Covey

The above-mentioned quotes are some of the pearls of wisdom we can find in the book.

There's a story, probably apocryphal, about an Amazonian tribe's reaction to a group of Westerners (possibly miners or farmers or similar) who had created a settlement close to their village some time in the 1960s. The settlers built a makeshift runway, and the tribe watched from afar in amazement as, shortly after the runway was complete, a plane arrived carrying supplies. The tribe immediately set about building a runway beside their village, believing that once it was complete, a plane would arrive on it with supplies. They had a long, fruitless wait. Obviously, there's a lot that doesn't ring true about this story, however it illustrates well the fruitlessness of adopting other people's actions in the hope of replicating their results, without really sharing or understanding their motivations. Presumably most of the rituals described above have one thing in common; they're the author's own.That's why they worked, they were what the author genuinely felt worked for them, they weren't adopted in an attempt to recreate the conditions of someone else's success. I've a creative friend who drinks whisky in the mornings when he's writing, because that's what Hunter S. Thompson did. He is not and never will be anything like Hunter S. Thompson. The overarching advice from this book should be: find your OWN rituals and routines. Forget about crappy books like these.

A friend of mine used to say he could write at any time of the day or night, but there came a point - after about three hours - when he didn't achieve much more by working longer. The best time, he said, is early morning, 5 or 6am. He could look again at something that seemed hard to write the previous evening, and suddenly everything just fell into place... As for myself, I can write any time I'm awake, but nobody would want to read it. Seriously now, I have realised that my most creative and productive hours are 3 -6 am. This is when my genius will fizz and pop, worlds are created, and my art manifests itself, seemingly without effort. At these magical hours, I will become a conduit for creative forces beyond my ken. At this special time, unfortunately, I always seem to be unconscious and dribbling, stretched out amongst bottles, filth and pools of damp...