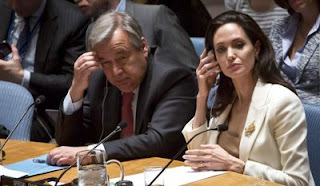 "More people fled last year than at any other time in our records. Around the world, almost 60 million have been displaced by conflict and persecution. Nearly 20 million of them are refugees, and more than half are children."

After having discovered Brasil, India, and after Durão Barroso as head of the European Union for the last 10 years, it's time for another Portuguese to steal the limelight: António Guterres. We also won the European Football Championship this year.

We are known for our inability to manage our public deficit as well as our international football stars. Not anymore.