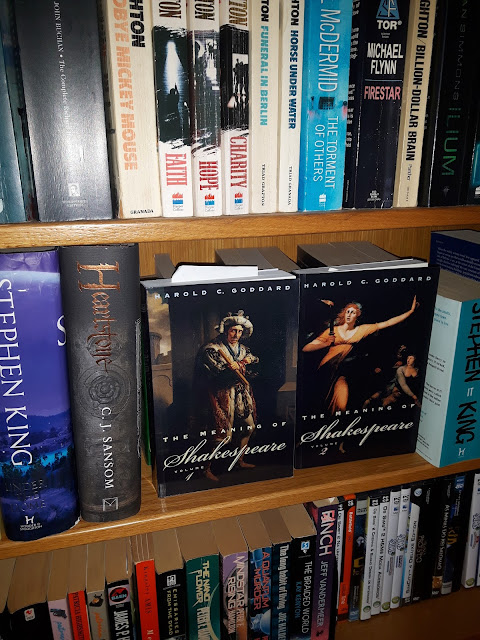 "Shakespeare led a life of allegory: his works are the comments on it.”

“Art is given us to redeem us. All we are in the habit of asking or expecting of it today is that it should please or teach–whereas it ought to captivate us, carry us out of ourselves, make us over into something more nearly in its own image”

“'King Lear is a miracle,' wrote a young woman who had just come under its incomparable spell. 'There is nothing in the whole world that is not in this play. It says everything, and if this is the last and final judgment on the world we live in, then it is a miraculous world. This is a miracle play.'”

in "The Meaning of Shakespeare" by Harold C. Goddard

Was Shakespeare a humanist as stated by Goddard? He portrays us as human, no doubt about it.  Goddard says that Shakespeare plays on stage “discloses things hidden to the reader. Read, they reveal what no actor or theater can convey.” I couldn’t put it better myself. Only by the juxtaposition between Shakespeare on stage and on the page, can we take Shakespeare’s full measure, both as a playwright and as a poet. Like Garber, Goddard read the plays in chronological order. Why do Goddard’s 2 volumes belong to my Shakespeare library?  Because Goddard finds “regularities” among the plays. Garber’s take on Shakespeare does not so much go for the regularities, but she goes instead for close and deep reading Shakespeare. After having finished his chapter on “Measure for Measure”, “Romeo and Juliet”, “A Midsummer Night’s Dream” and “Hamlet”, I can’t stop thinking they’re really about melancholy. Goddard suggest that in Shakespeare downheartedness is not an inborn inclination as the classics might say, but it is a result of being driven to act against one’s own essence. Romeo is a suitor who has to maintain the family honor, and Hamlet is an artiste who must dabble in the world of politics.

There is a lot more to Goddard’s analysis. Goddard does great work with a lot of plays. In emphasizing the people and what galvanises us, and looking at us from the scope of Shakespeare’s plays, I cannot help but sympathize with so many of his characters. That is certainly one thing that makes Shakespeare one hell of writer. Only a few of them get into the core of who we are the way Shakespeare does. “The Meaning of Shakespeare” helped (still helps) me to see that.

Every time I’m re-reading or re-watching “A Midsummer Night’s Dream”, I can’t stop thinking about Goddard’s take on it:  “to announce for the first time in overt and unmistakable fashion the conviction that underlies every one of his supreme Tragedies: that this world of sense in which we live is but the surface of a vaster unseen world by which the actions of men are affected or overruled” (1951, 1st volume, page 74). This Hermetic principle, “as above, so below,” is also most indelibly shown by Hamlet:

“There are more things in heaven and earth, Horatio,
Than are dreamt of in your philosophy.”

What a teacher Goddard must have been, maybe on par with my own teacher, Vicky Hartnack.
Publicada por Manuel Antão à(s) 1:11 da manhã

Just swinging over here since I'm almost as frustrated with Booklikes as you are at the moment.

With these posts, do you "schedule" them? Because even though I'm following your blogger account with my wordpress feed, I never seem to see these! I just scrolled through my feed and they are there, but I don't ever remember seeing it. This has happened several times. Wondering if I'm going to have to bite the bullet and start following blogspot people on my blogger account...

I think the syncronization between Blogger and WP doesn't work all the time. Sometimes it does, sometimes it doesn't. That's the nature of the beast (developing different interfaces for very different products). I just checked, and my WP blog is not up-to-date with my blogger...darn!!!!!!!! Thanks for the heads-up.

Either BL's improves on its performance, or I'll leave...Can't stand it anymore...

I concur. I've given myself til the end of October to see improvement. It's like a bad relationship and it needs to improve or end :-(

I am amazed that I haven't heard of Goddard. My father was something of a Shakespearean scholar, we had quite a library of books about the playwright and his plays.

@ alittleteaalittlechat, Goddard is a very closed "secret". Even in Shakespearean circles he's not every well-known. He's even considered "dated" because it was published in 1951 (*gasp*). As far as I'm concerned it was a really eye-opener when it comes to Shakespeare...