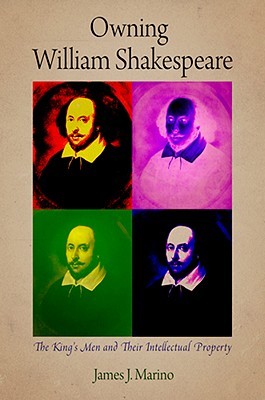 “Those who have taken Heminges and Concell at their word, hoping for some unmediated record of the authorial intent, have made a serious miscalculation. The writer, William Shakespeare, is not to be found in the Folio pages. The figure critics have embraced is an actor.”

Mediocrity has always ruled. And it still rules today, but in a different form. Someone once said that great poetry can no longer be written because we are now all democrats, aren't we? Mediocrity is good these days because it is 'democratic', not because it is aristocratic or Oxbridge elitist. But what we mean by "democracy" here is really bureaucracy. The plethora of creative-writing scholarships and courses promoting the most mediocre work is just one expression of this. For me, I think some of the great Shakespeare debates are side-shows (in Marino’s case the so-called “Sincklo/Soto Problem” in the play “The Taming of the Shrew”, or, should I say “The Taming of a Shrew”?) distracting us from the fact that mediocre values continue to be triumphant in our present poetic culture. I’m sure books and “problems” like these contribute to a true appreciation of Shakespeare unlike the ones dealing with the ill-reputed Authorship Question...Everyone is dancing round their handbags at this party... Once you get into the core truth of what Shakespeare is about - the philosophy, the language, the breathtaking understanding of human nature, the poignancy, you have to concede to a greater power somewhere within. Yes a genius, there's no other word, but surrounded by a core group to feed ideas, information, tales from Italy, the classics, translations (and works not yet translated). But there are so many questions and interrogations regarding Shakespeare: The Authorship Question I mentioned above, Who Edited the 1623 Folio, Who Shortened King Lear, etc. I am assuming Marino is a stratfordian trojan infiltred into de Vere/Oxfordian camp. That’s why I bothered reading his book and his assertions. When it comes to the editing of Shakespeare, the point is that most scholars now believe Shakespeare made first drafts of his plays and then, with the assistance of the players, prepared a draft for actual performance. This draft might be copied once or twice for the benefit of the actors and would then also have additions made to create a "prompt-book", listing entrances and exits the way the players needed them and other stage directions as necessary. Once a play had been performed, further revisions might take place - perhaps to smooth it out because certain bits weren't working, or even changing quite a lot because, say, they were to move the performance to an entirely different theatre (maybe a play originally designed for King James littler 'chamber' type theatre might be allowed to go to something larger, or go on the road). This is the general idea of the history of Shakespeare's plays, with usually the promptbook or similar early draft possibly being used to print for the Quarto texts (though some show signs of having been reconstructed from the memories of the actors rather than from a text). When Heminges and Condell put together the First Folio they probably used the best sources they could find - one of these may well have been a version of Lear that Shakespeare had revised in the eight years between first publication and his death.

But it rather depends on what "the task of the author” in question is. And the notion that there is only one "reality" is one that neither scientists nor studies of the humanities have espoused for a while. For instance, how closely does quantum mechanics model reality? At one level, it does so with extraordinary accuracy. How closely does it model the reality of modern artillery shelling a town - well, still with an extraordinary degree of elegance, but in a way that gives no modelling of the reality which concerns the man doing the aiming? How far does the Newtonian mechanics concerning the artillery man model the reality of those trying to understand the grounds of the conflict? And then how does the work of the diplomat (or the historian) model the reality of the doctor trying to deal with a shattered leg on the person who has just been hit by a piece of metal from the artillery? And only a few of these "realities" will model that of the moral philosopher trying to work out whether we can we deduce anything useful about the behaviour of all men from the behaviour of those involved in the scenario just described? Is the reality of human nature best modelled by looking at men in groups or men as individuals - and who decides?

And is any of these "the task" relevant to a mother on the other side of the world with a crying baby?

And in literature, different authors have addressed themselves to different "tasks", so that Shakespeare was not trying to do the same thing as Spenser, for example. Even when it comes to literary criticism work which seemed exciting and illuminating to one generation asks all the wrong questions, as well as coming up with all the wrong answers, to another. Analysis of Shakespeare by Marxist-Leninists and Psychoanalysts come up with different answers, but both set of critics despise earlier generations as "having no methodological under-pinnings" and are despised by later ones who can't imagine how anyone believes that there is such a thing as "truth" anyway.

Even in "real life" no two people have the same experience of a single event. What you find "plausible" in fiction (or non-fiction for that matter when one thinks about this book) surely depends on what you are looking for.