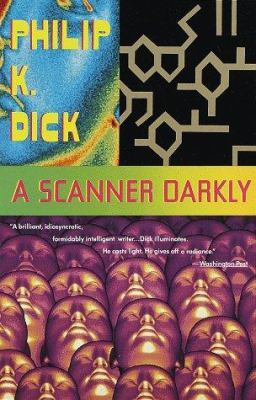 I'm a big Pynchon fan, too, so don't get me wrong here, but it seems to me like the main difference between Dick's writing style and Pynchon's--or at least, the difference that mostly accounts for Dick being treated as a "pulp" author with some interesting ideas whereas Pynchon is considered a major "literary" figure--is simply that Dick tends to write in crisp, straightforward sentences that just directly say what he means to say, whereas Pynchon's writing is (in)famously dense with allusion and rambling esoteric figurative expressions to the point where it can be an intellectual exercise in its own right just trying to figure out what the hell Pynchon is trying to say.

All of which makes major Dick novels like “Do Androids Dream of Electric Sheep?” or “Radio Free Albemuth” sort of resemble, IMHO, what “Gravity's Rainbow” might have looked like if Pynchon had been working with editors who expected him to actually keep tight deadlines.

I think Dick was really gifted as a wry satirist, too, and this is something I think he's often under-appreciated for. Probably my favourite single episode in all of Dick's stories I've ever read--and I was quite overjoyed to see this faithfully recreated in the film adaptation--is still the "suicide" sequence from “A Scanner Darkly”. In short, I don't think Dick was ever bad at writing--he just doesn't seem to have had any real interest in the kind of writing that people like James Joyce or William Burroughs (or Pynchon, for whom to my mind it seems that both Joyce and Burroughs were major stylistic influences) were famous for. I mean, in the 60's it was still nigh-impossible for anyone writing SF at all to be taken seriously by the "literary" world, which is important to remember as well--in the minds of smart, educated, respected literary critics, you simply didn't write about aliens or robots or time machines if you even wanted to be taken seriously as a "good writer", so I think it stands to reason that people like that were never an audience that Dick was even trying to impress or appeal to. He was writing for teenage boys and maladjusted stoners who didn't exactly run in sophisticated high-culture circles, so I imagine those audiences were really the people to whose tastes he tailored his style. I do think that with Dick, the whole is somehow greater than the sum of the parts. There are a few books that stand out as more perfect, or more complete, than the others, but in general I think it is the cumulative impact of the themes across the whole body of work that is his greatest achievement. Some of his books are quite flawed, or even weak - yet almost all feature at least one startlingly brilliant idea.

I read lots of Phil Dick as a teenager and it really put a perspective on the world that all the Asimov, Clarke and other SF authors really didn't... It's not that Phil Dick was more SF than the others; it's just the psychedelic perception manipulating stories seemed to be more vivid...One of the things that I enjoy about Phil’s books are that his lead characters lack "agency." When things go cross-eyed, they have a tendency to freeze up and simply endure whatever madness their damaged universe dishes out. It adds a certain plausibility to his stories -- we've all been, or we know, the guy who can't get it together, even when reality itself is up for grabs.

The thing to remember about Dick is he was inventive. The mechanical SF of today is pre-packaged, made to order product. Dick (who could have written about that) explored darkly funny worlds. When someone says he couldn't write, who are they comparing him to... today's writers with the publisher's crack team of craftsmen: Alpha & Beta readers, Restructuring, Copy-editing, Proofreaders? (Martin and Rothfuss come to mind) For that level of writing support, the books of today had better be good. And yet they don't have a tenth of Dick's creativity. Did Dick even have an agent? The Scott Meredith Agency - his last attempt to get a literary agent, returned his manuscripts, didn't it? Those who say he couldn't write are glossing over the reality of publishing. The question is: does the carefully crafted fiction of now bear comparison with him? I've studied Trad-Pub genre offerings for the last twenty years; I know what my answer would be.

Dick was not at all into dystopia or any kind of prospective/political SF. His main interest, in his life like in his art, was personal identity and all the doubts surrounding it. Who am I? Is the world around me true or an illusion? It was a philosophical and idiosyncratic SF that put him in another dimension than the rest of the genre. Emmanuel Carrère calls Dick the Dostoevsky of the 20th century, which is something I never agreed with. There is only one Dostoevsky, who was moments from being executed, reprieved and sent to a Siberian prison. Later released, became a gambling addict and after authoring some of the most distinctive, profound works of Literature became a national figure in Russia. Carriere is not correct with his comparison. Any more than Dostoevsky was a Russian Phillip K. Dick. "Who am I? What is my place in the world?" I can see why Carrère would appreciate Dick the same way Truffaut and French cultural commentators idolized David Goodis. He reads differently in their language and culture. Whereas in English, both of them come across as unable to escape from their pulp vision of the world. Orwell was always suspicious of novels that eschewed politics completely. Rightly so. I would think that Dick like Ayn Rand who asked the same questions, "who am I?, etc.) fantasize about an island or planet all their own in which they do not have to share anything with others. Dick inhabits a solipsistic universe and I like some of my fiction thus. Heinlein  is another case in point when it comes to solipsistic universes...I've written about it elsewhere.

“A Scanner Darkly” is a fine example of his literary world; he inhabits a solipsistic terrain which is the most extreme form of subjectivity. I get a measure of nihilism, and full-fledged meaning, reading him. I have to say, though, Kafka and Borges are two authors that I don't particularly enjoy reading. I know they are stalwarts of the modernist canon but I find them gimmicky, Borges with his inverted, convoluted, Kabbalistic fables and Kafka with his Central European father/Emperor psychological complexes. Banishing politics from literature has robbed it of much of its context. This is why Phil Dick is such a hero to me. Yes, he could set it aside but he addressed it, as well. I am almost sure Phil Dick and his descent into self-destruction via drugs was a response to the direction America went in from the 50's to the 80's. It's evident in many films and books during that period.

Having just read read "Light" and seen your comment on it, I have to say, I don't understand why books like you described above even sell. It's like buying food you hate just to impress people when they come over and you can casually mention "oh, yes, here's our pantry with Hated Food X". That whole mentality of basing your life around what other people think, is foreign to me. I realize that we all do it to some small degree, to please those we care about. But to carry that to the level where complete strangers dictate what you read or how you enjoy what you read? I guess that is why I'm not on GR :-)

As for the review. This is probably the one PKD book that I actually WANT to read as the premise is just so bizarre that I want to see how it works out. Is it written in such a way that the whole 2 people in 1 mind is supposed to be a twist or is it revealed early on? I would think that it would make a great twist BUT to rely on it to carry the book would be asking too much. The movie The Sixth Sense is still a good movie even if you know the twist at the end.

"Not at all interested" in political Sci-Fi ?
You'd have to turn a willful blind eye to books like Radio Free Albemuth and Flow My Tears, the Policeman Said to come up with that statement. I think the dangers of a police state were on his mind quite a bit, especially after the Kent State shootings and then his own persecution by the FBI.