Falsifiable Multiverse: “The Emergent Multiverse: Quantum Theory According to the Everett Interpretation” by David Wallace 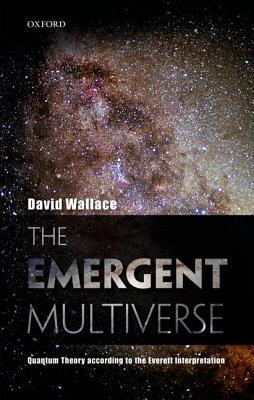 "Readers familiar with typical discussions of the measurement problem may be surprised that I have mentioned neither the 'eigenstate-eigenvalue link' nor the 'collapse of the hidden variables' theories.”

In “The Emergent Universe: Quantum Theory According to the Everett Interpretation” by David Wallace

Surprising statement to say the least. If one accepts the truthiness of the eigenstate-eigenvalue link it follows that if states are relative, then so are the values of observables. Not accepting this. What have we got here? If an observable has got a value at a certain moment, is that observable-relative or not?

A long time ago I remember Fred Hoyle asking "Are there any constants for all the universes?” I thought the universe was a put up job. There always being "something" is what shivers my timbers. I know they say energy is eternal but what is energy?

Relax fellow reviewers. I got this. Does Wallace mean there's another universe where Brexit was narrowly defeated and Trump is still on the Apprentice? Wallace didn't need to go to all that trouble and expense to find an alternate universe by writing this book: the existence of a Trump is proof in itself. He can single-handedly show us alternative facts, adjustable truths and negotiable values. His very existence shows that starlight can so bedazzle a significant non-majority of Americans that they lose all sense of reality, confusing it with reality TV. And the ultimate cost of his existence could be astronomical. How lucky we are to live in such unbelievable times.

This is precisely the issue that the multiverse [or this particular version of the multiverse; there are at least three broad versions: (1) where do physics' constants come from (2) QM wave function collapse (3) multi-dimensional string theory]. The idea is that constants are actually variable, randomly selected as a universe starts, and we happen to have got lucky with our universe's constants (except, we aren't really lucky; if they weren't suitable for us existing, we wouldn't be here to tell ourselves how lucky we are that we got the constants we got). What about “time”? Time is something physics have a really hard time addressing, since (1) it is unclear whether it is continuous or discrete (2) at the particle level, it doesn't really matter what direction it goes in; it is really just a macroscopic phenomenon that it goes in a particular direction, based on probability (like entropy).

There is no reason why the existence of infinite multiverses would by necessity imply infinite physical conditions. There may be infinite universes in which each possible outcome of each interaction of every atom of every piece of matter or antimatter has occurred to produce a different result, while still governed by the same universal laws. Each page of a book has a different combination of letters and words but the ink is still ink (or was...). In some of those universes, the ink and the paper do not form. You may have individual letters floating around, but no structure which can hold them together into something more complex.

If you believe, as many physicists do, that everything is predetermined (i.e., the decisions we make are the result of the physical and chemical make-up of our brains, which were themselves determined by events pre-determined by others' brains) then, either the laws of physics, or the start conditions would have to be different for any difference to occur.

In my eyes, the starting conditions are the same if we were to think about multiverse. Same mass, same force, same result. I would personally take out that decisions are predetermined, because I would argue some of them are based on chance. Lottery results predetermined by basic physical laws - fine with that. Picking my numbers predetermined by something I decide subconsciously - cannot disagree. But picking any random coin from your wallet and throw it, heads or tails, it’s hard for me to believe there is not a single random factor for this pretty simple action, result and decision. From choosing which coin to which side is starting upwards. But then, I’m no scientist, physicist, nor in any way STILL involved with that field; just using what I was taught and thinking about stuff when I feel bored or interested (pick one).

Whichever you had in mind:

1.   The many-worlds interpretation is just that: a possible interpretation of the results of quantum mechanics. It explains, how real randomness (if there is such a thing) could make sense. It's just an idea, and you don't necessarily have to accept it, especially because there are other, deterministic interpretations of quantum mechanics (see below);
2. The "multiple universes" idea is not incomprehensible at all, you just have to understand the concept of more than three dimensions. To put it simply, imagine a soap-bubble, floating in zero gravity. Imagine, that there are some animals, who are very-very flat, and they live on the surface of the bubble. They are effectively blind, but they can sense the waves of the surface of the bubble. This basically means, that they cannot have any information about the three dimensional space that surrounds them, so their world is effectively two dimensional: they only "see" what happens on the surface of the bubble. It's not hard to imagine more than one such bubbles floating in the three dimensional space. Now, the same goes for the "multiple universes" idea, only one dimension added. In this, our universe is a four dimensional "bubble" with a three dimensional surface (on which we live), floating in a four dimensional space, where other "bubbles" can float as well. Of course, it's hard to visualize, but the analogy helps a lot;
3.    At the microcosmic level we find that subatomic elements are both particles and waves, thus defying the most basic law of logic that A cannot be both A and not-A. Please look up the Bohm interpretation of quantum mechanics for an easily visualizable idea. It suggests, that subatomic elements may be actual particles that are guided by "pilot-waves", much like ping-pong balls floating on the surface of a pond are guided by the waves of the water surface;
4.     If one mentions quantum entanglement, saying two particles once entangled are still in instantaneous communication with each other even though they might now be on opposite sides of the universe (not that the universe has sides), one is thus abrogating Einstein's principle that nothing can travel faster than light. Really? Actually "Einstein's principle" is that "signals cannot travel faster than light". It was proven, that the nonlocality of quantum mechanics doesn't violate this principle, because you cannot use quantum entanglement to send signals faster than light.

Just to make it clear: just because some theories of physics are hard (or, as for now, impossible) to visualize, it doesn't bring them down to the same level. They are based on actual observations. The trouble with naive falsifiability is that unless one can provide a properly designed critical test then one ends up not being certain as to whether one falsifying the hypothesis or an underlying theory or assumption. The difficulty we have here is trying to provide such a test given that what we are looking at may not be causally connected to our universe. And the difference being that the multiverse is not a made up idea that makes no sense. Another key difference is that physicists don't "believe" in the multiverse nor derive some virtue in "believing" despite their being no empirical evidence to provide confirmation. The multiverse is a potential consequence of our attempts to unify relativity and quantum mechanics and develop "a theory of everything". It may or may not be provable. Unless and until it is provable by observation then it remains speculation. But that is fine because further work on the underlying math might lead to a testable hypothesis. That is how physics works.

Bottom-line: Wallace’s treatment of the Everettian Multiverse is indispensable to all metaphysicists trying to fill in the gaps. For the rest, i.e., for “normal” physicists it’s doubtful: it’s one thing to advocate a big multiplicity of cats regarding the blur between classical (macroscopic) and quantum (microscopic) reality, but it’s another ball game to suggest the existence of indefinitely many cats in the Schrödinger Gedankenexperiment…

NB: God did it, move on fellas, nothing to see here.

Doesn't mean we shouldn't be investigating, but when the High Priests of "Scyence" tell me
"X" is true but can't test it, then I call BS. Especially when such things are used to push "nothing is true so everything is ok" philosophy and it bleeds down to actual actions on the part of bureaucrats.
Nothing worse than a politician quoting some scientist and prefacing it with "Science says..."

Yet Another entertaining review, of a book I have no intention of reading. In fact, I'm on indefinite break from pop-physics/metaphysics books.

Re: Trump, 2020. Well, I certainly didn't vote for the guy, but, to my surprise, he hasn't done too badly as President. The Republic hasn't fallen! Not yet anyway. And, in my political judgment, Trump has a pretty fair chance of wiping the floor with milk-toast Joe Biden. For better or worse.... The Democrats are lined up to nominate yet another weak candidate. OK, Biden is better than Sanders!

What has this to do with physics? Nada. Just that your 2018 Trump comments caught my eye. And I'm still annoyed with all the time I've wasted at the behest of various pop-physics gurus, promising to explain the Mysteries of the Quantum. Feh, I say.

"Does Wallace mean there's another universe where Brexit was narrowly defeated and Trump is still on the Apprentice? Wallace didn't need to go to all that trouble and expense to find an alternate universe by writing this book: the existence of a Trump is proof in itself."

It was all about falsifiable hypotheses in Multiverse theory...

I've been getting a lot of stick here for meddling in other people's affairs politics-wise.